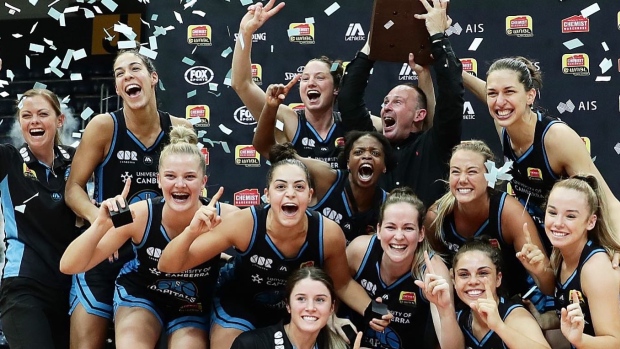 The WNBL season just wrapped up in Australia, and for the second season in a row, Kia Nurse is a champion with the UC Capitals after sweeping the Southside Flyers in the best-of-three grand final.

Thank you, Canberra – we love this city. #GoBIG pic.twitter.com/BzD8aRjlIy

Nurse won the league’s regular season MVP, after leading the league in scoring with 20.9 points per game. Impressively, she flew to Belgium at the conclusion of the regular season to lead the Canadian national team to an Olympic berth in a FIBA qualification tournament, and then returned to Australia in time for the start of the playoffs. Busy month!

Next, she’s off to Toronto to join TSN’s March Madness panel, and her WNBA training camp with the New York Liberty isn’t too far off either.

For now, though, Nurse has a championship to celebrate.

BACK TO BACK CHAMPIONS 💙🖤💙🖤 pic.twitter.com/MU2dHNQw6d

Congratulations @KayNurse11! We join all of #HamOnt in being proud of all you’ve accomplished! #MVP #Champion #OurGame @CanBball https://t.co/WlgCneSvDh