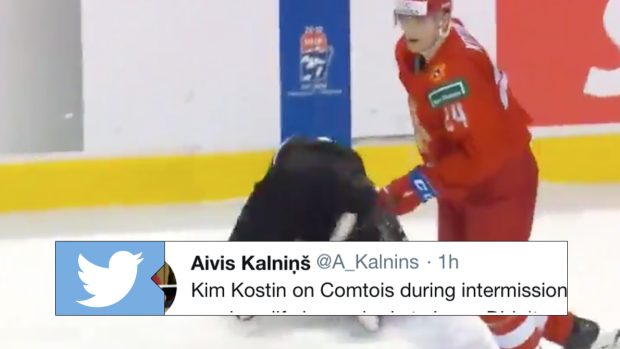 It's rare for a player to call someone out during an intermission, but Monday night, Russian captain Klim Kostin called out Canadian captain Maxime Comtois during the first intermission for diving.

Klim Kostin of 🇷🇺 had this to say about 🇨🇦 Maxime Comtois during the first intermission. pic.twitter.com/VdMOfcH1lW

The interview was on the Russian broadcast of the game and a Reddit user gave more insight into the quote.

Kim Kostin on Comtois during intermission interview on Russian TV: ''In his previous life he worked at circus. Didn't you know that? Perhaps he watched the World Cup of soccer, Neymar is probably his best friend.'' #WJC2019

Comtois and Kostin got into it in the 1st period and both ended up in the penalty box, but some people called out Comtois for embellishment.

Kostin and Comtois enjoying each other. pic.twitter.com/PnKnMwXSzd