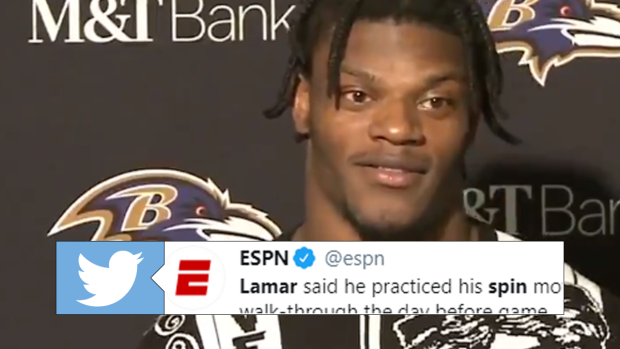 Lamar Jackson is quickly emerging as one of the biggest threats at the quarterback position in the NFL. Similar to what made Michael Vick so special, Jackson’s cannon of an arm mixed with his game-changing speed make him a multi-faceted weapon that haunts the dreams of defenders.

Toss in a money personality and you’ve got the complete package.

Jackson has become known for his friendly attitude with the media, and he routinely drops money quotes. He was back at it again after his outstanding performance against the Cincinnati Bengals on Sunday, and he even tossed in a spin move to the delight of all those in the room.

Lamar said he practiced his spin move in slow motion during the Ravens walk-through the day before game. pic.twitter.com/4U8F4l1zv3

#Ravens QB Lamar Jackson says he practiced that spin move in a walkthrough. Then he showed us. pic.twitter.com/laZRcDBfWl

The reporters were talking about a spin move Jackson pulled off in the game as part of his 47-yard highlight reel touchdown. It was DEFINITELY worth talking about.