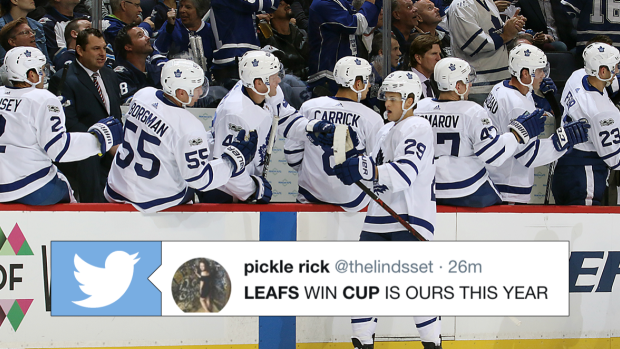 After their awesome 2016-17 campaign, expectations were high for the Toronto Maple Leafs coming into the 2017-18 season.

On opening night Wednesday, the Leafs responded to high expectations by starting the season by crushing the Jets in Winnipeg 7-2.

A goal each for the #Leafs young trio in their season opener.

Aside from a great showing from Toronto's trio of young stars, Patrick Marleau scored twice in his Leafs debut and Frederik Andersen was solid in goal.

It's hard not to get excited by what you saw if you're a Leafs fan and as you'll soon see, some Toronto fans might be a little too excited as the hockey world reacted to their win.

The Leafs are gonna win the Stanley Cup

Have the Leafs won the cup yet?

Leafs are gonna win the Cup and we'll never hear the end of it.

LEAFS WIN CUP IS OURS THIS YEAR

Not to be too leafs fan cliche, but the leafs are winning the cup this year #Leafs

Leafs are winning the cup confirmed, Matthews with 246 points for the year and Marleau with 164 goals on the season REMEMBER THIS TWEET

The Leafs are winning the cup this year 😌

The Leafs have shown they’re a playoff contending team in just one game. #LeafsNation

Leafs are looking unbelievable. This season is gonna be crazy.

Brace yourselves. Non-Leafs fans are already coming to chirp the Leafs after ONE GAME

Auston Matthews and the Leafs look terrifying after one game. That or Winnipeg's rise was greatly exaggerated

Auston Matthews getting hit with the sophomore slump, only 3 points in his first game this year #NHL #Leafs

So the #Leafs open the season with a 7-2 win...not planning the parade yet, but I'm heartened. #TMLtalk