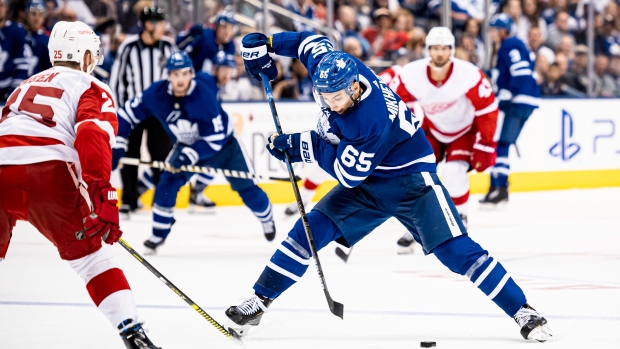 The Leafs brought over 24-year-old Ilya Mikheyev from Russia this offseason, and he wasted no time in making his impact felt. Playing in the first game of his career, Mikheyev was able to find the back of the net in Toronto’s season opener against the Senators.

Yeah, maybe that’ll gas your confidence up a bit. Mikheyev seemed to be feeling himself after the game, waving off his translator and attempting to conduct his first interview with Leafs reporters in English.

Oh, and he’s also bringing the very fabric of our culture into culture, asking why Canadians don’t eat soup.

Talked about the adjustments to being in Canada now: “I like soup. I don’t know why you don’t eat soup. My girlfriend cooks for me, so I’m very happy.”

Mikheyev had never spoken with us before, and shrugged off the translator to try and go it alone. Has to be tough in a second language, and he did really well.

A take: Soup is good! We have no problems with soup. Can’t speak for everyone else in this country, but... there’s no anti-soup agenda here in Canada, is there? Hopefully there isn’t. Nothing hits the spot like a good chicken noodle.

Maybe Mikheyev can actually teach his new teammate Mitch Marner a thing or two about soup, because Marner definitely has some questionable taste in that department.