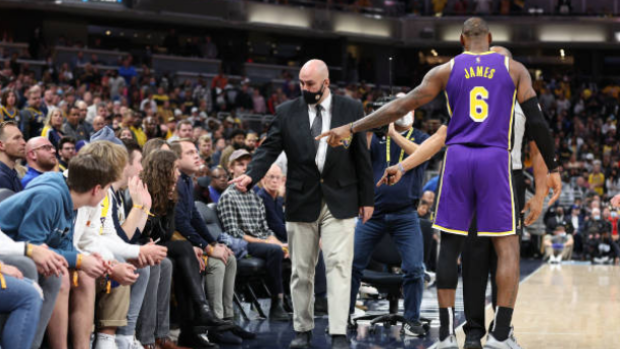 LeBron James has certainly had an eventful week.

The Los Angeles Lakers superstar nearly got into the middle of a bigtime brouhaha on Sunday after smacking Detroit Pistons big Isaiah Stewart in the face and earning a Flagrant 2. It also earned him a one-game suspension, which he served when the Lakers took on the New York Knicks.

LeBron’s first game back was also quite eventful. Not only did he hit “The Silencer” in overtime, but he also had two fans that had been sitting courtside ejected from the game.

LeBron unhappy with some fans courtside in Indiana pic.twitter.com/1Ud3B69G1E

The fans LeBron had kicked out... pic.twitter.com/4Q2HO6mKaO

LeBron didn’t appear to explain exactly what happened to the officials, but he made it very clear that he could no longer have the fans in the building. After the game LeBron addressed the moment, but he declined to go into much detail.

After the game, James did not elaborate on what the fans specifically said or did, only describing their actions as “outside the line with obscene gestures and words.”

“When obscene gestures and language come into it, (it) can’t be tolerated,” James said. “There’s a difference from cheering for your team and not wanting the other team to win and things I would never say to a fan and they shouldn’t say to me.”

Regardless of what happened, it didn’t seem to bother LeBron too much. He went on to sink think dagger.

LEBRON HITS THE THREE AND THE SILENCER 😱👑 pic.twitter.com/mNp0Uzd6jD

The Lakers are now 4-0 in OT this season. pic.twitter.com/FHY9xIBLXU