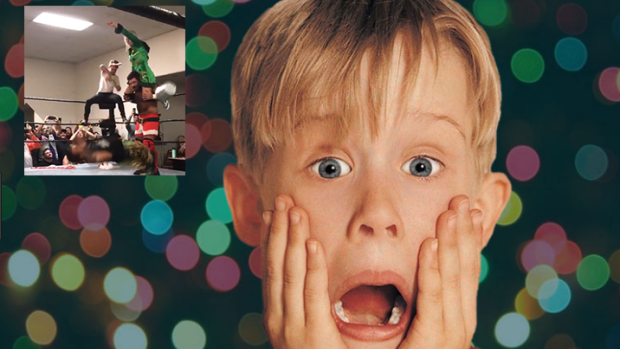 Kevin McAllister -- the kid from the Home Alone film franchise -- may be the most dangerous kid in the history of children. Not only did he manage to foil the 'Wet Bandits' -- the top burglars on the Eastern seaboard -- on TWO occasions, he also managed to K.O. them multiple times in the process.

Thursday, at a event called 'Bar Wrestling' in Los Angeles, actor Macaulay Culkin made an appearance in the ring, interfering with the match using a few of McAllister's old tricks from Home Alone. Unsurprisingly, they worked to perfection!

Paint bucket to five-star frog splash on former WWE star Hornswoggle? Come on Culkin, that man has a family! We guarantee that McCallister could hold his own in a two-on-one match versus either the Wet Bandits OR the Sticky Bandits.