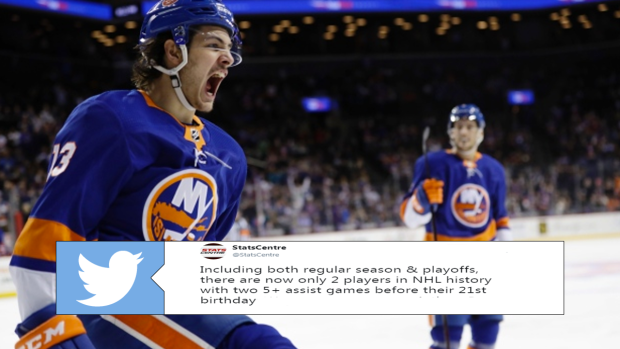 The Detroit Red Wings and New York Islanders traded goals back-and-forth ad nauseam on Friday night in what was one of the most thrilling games of the season.

An emotional rollercoaster that ended on a serious high note! 👌👌👌

Mathew Barzal added to his campaign for the Calder trophy, notching his third five point game of the season with five apples in the Islanders 7-6 overtime win over the Wings. Brock Nelson recorded a hat trick in the big win.

The Islanders found themselves down three goals with six and a half minutes to go in the third. After Tyler Bertuzzi was assessed a game misconduct for swimming his stick at Cal Clutterbuck, the Isles went to work on their prolific power play and notched not one, not two, not three, but four goals on the man advantage.

He joined some pretty elite company with multiple 5-assist performances in one season.

Mathew Barzal (NYI): 5th player in the last 30 seasons with multiple 5-assist games in a season; the others are Wayne Gretzky, Mario Lemieux, Peter Forsberg, and Pat LaFontaine pic.twitter.com/LGLuu2f6zH

Mathew Barzal has been an outstanding playmaking pivot for the @NYIslanders, as a pair of 5-assist games this season have the rookie now sitting in select company all-time pic.twitter.com/zOOwiyRBdv

The @NYIslanders sure have put on an offensive show this season & have seen a rookie post 5 points in a game 4 times already- putting them on this short list pic.twitter.com/YDeLcdat1W

Matthew Barzal now has as many five-point games in his rookie NHL season as the Boston Bruins had consecutive first-round picks to pass over him with pic.twitter.com/Qf9puzHM0t

If you only counted Barzal's five point games, he would still have more points than 469 of 828 NHL players this season.

Including both regular season & playoffs, there are now only 2 players in NHL history with two 5+ assist games before their 21st birthday: Wayne Gretzky... and Mathew Barzal

Barzal now has 58 points in 56 games, and is separating himself from the rest of the rookie pack, including Canucks rookie sniper Brock Boeser. Boeser is now 11 points behind Barzal and is currently out day-to-day with a hand injury.

This Barzal guy is an absolute freak.. it’s like fishing for fresh water bass in a salt river you’re just not gonna catch him. 5 fuckin points tonight. You know what that reminds me of? When Heater ding donged 5 pts in the ‘03 allstar game with Roenick. The Toe-Drag boyz

Need another reason to why @Barzal_97 is unreal?

He's the first rookie since the NHL’s inaugural season in 1917-18 to record three games with at least five points in a single campaign. pic.twitter.com/Zguhs4INms

Not bad for a player that was passed over 15 times in the 2015 NHL Entry Draft. Only Connor McDavid has a higher points per game rate out of the entire draft class.