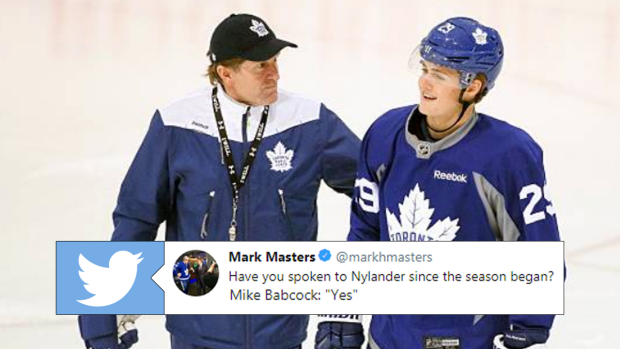 We aren’t far out from the William Nylander situation finally reaching a head. The deadline is 5pm ET on Saturday for Nylander and the Toronto Maple Leafs to work out what the talented forward’s future will look like.

It all comes down to three options; he signs with the Leafs, the Leafs trade him, or he sits out the season.

With all the speculation coming in every which form, one person has remained consistent in their belief – Leafs head coach Mike Babcock.

On Friday, Babcock was asked if he’s spoken to the young Swede since the beginning of his holdout season. Babcock filled in the reporters, explaining that he had, that it was pleasant, but that the Leafs would never beg someone to come play for them.

FULL VIDEO OF INTERVIEW AT TOP OF THE PAGE

Is Babcock looking forward to knowing – one way or the other – about Nylander?

"No. I’m looking forward to Willie being on the team. In my heart & in my mind I know he’s going to be on the team. That’s how I have to think."https://t.co/BOD2Tl68zY

Have you spoken to Nylander since the season began?

What’d you say? Come back, please?

"No. We’re not begging anyone to be a Leaf. That’s not what we’re doing at all. It’s a privilege to be here for me & for everybody else."

Morgan Rielly on Nylander: "It’s not even anything we think about. It’s not anything we really talk about. If he’s here in a few days then great, if not we’re in the same position we are right now, we feel pretty good about it so we’re not overly worried."https://t.co/RpEu01J0Nh

There’s a chance that Babcock is trying to speak it into existence more than anything. After all, he consistently maintains that he is not involved in that side of the team and often uses this reason to deflect hyperbole.

It won’t be long until we find out whether Babcock’s assumption  comes true.