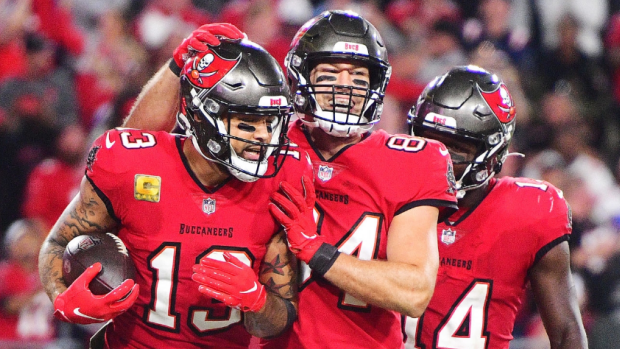 It was the touchdown heard around the world when Mike Evans caught Tom Brady’s 600th career touchdown pass, but it was made into an even bigger deal thanks to Evans’ forgetfulness. After reeling in the milestone touchdown, Evans ran to the stands and proceeded to give the ball away to a fan – Byron Kennedy.

The whole thing turned into quite the story, as the ball was reported to be at a value of more than $500,000. In the end, the fan was a good sport, and he ended up receiving a bounty of gifts in return for the ball.

JUST IN: The deal has been made with the Bucs fan who gave up the Brady ball.

2 signed jerseys + a helmet from Tom.

A $1K credit at the Bucs team store.

2 season tickets for the remainder of this season + next

Fast forward to Week 11, and Evans found himself back in the end zone with another milestone touchdown. This time, it was his own milestone.

Mike Evans scored his 72nd career touchdown, breaking a tie with Mike Alstott for the most in Bucs history.

It's his 4th season with 10 Rec TD. All others in Bucs history have combined for 2. pic.twitter.com/qSh9NYvnGP

This time around, Evans wasn’t about to cost the Bucs another bushel of gifts. He did, however, mock his own forgetfulness by pretending to give away the football.

Somewhere, a Buccaneers operations manager let out a big sigh of relief.