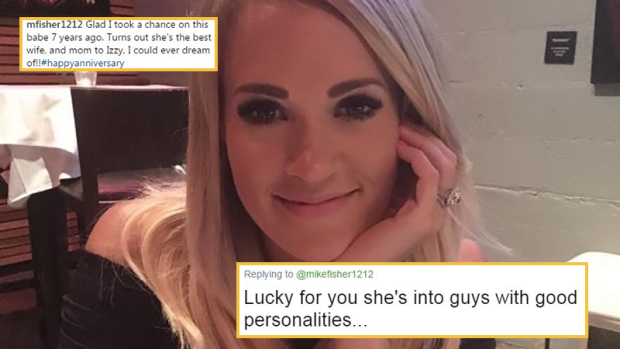 If there was a mathematical equation that actually allowed you to quantify the importance of fan support to a home team, Carrie Underwood's presence during the Nashville Predators playoff run probably would've been good for about 3-4 wins minimum.

The country music superstar was frequently in attendance at Bridgestone Arena throughout the 2017 Stanley Cup playoffs, cheering on her husband and captain of the Predators, Mike Fisher. Underwood was also perhaps the Predators most vocal fan throughout the playoffs, sharing memorable reactions, game after game. Monday, it was Fisher's turn to take to social media feeds to celebrate his significant other, posting a heartwarming message on his Instagram account to commemorate their 7th year anniversary.

Glad I took a chance on this babe 7 years ago. Turns out she's the best wife, and mom to Izzy, I could ever dream of!!#happyanniversary

But what would a social media post be without a bit of friendly banter? Replying to Fisher's post on Twitter, someone (presumably a friend) sent a funny follow up message, to which Fisher replied with some self-deprecating humour.

Lucky for you she's into guys with good personalities...

Married her before she had cataract surgery https://t.co/N15W3wjTgf

You'd win Mr. Congeniality any day... in my books.

You wouldn't need cataract surgery to see that these two are definitely the most popular couple in the NHL at the moment, and it's easy to see why.