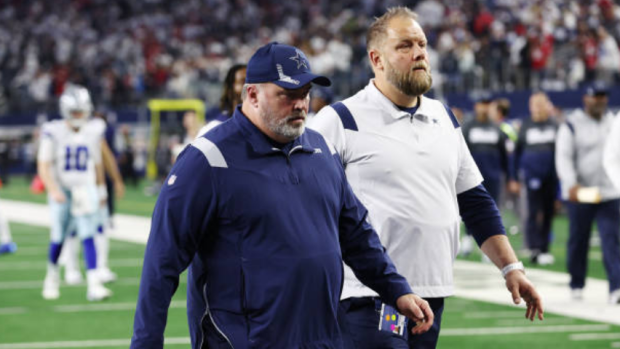 The Dallas Cowboys have been ousted from the NFL Playoffs in heartbreaking fashion, as per usual. While heartbreak is no unfamiliar feeling for the Cowboys faithful, this loss stung particularly bad.

In fairness, it didn’t really feel like the Cowboys were in it for most of the game. Still, they found themselves down by 6 points with a final drive to go.

With promise of a spectacular ending, win or lose, this is what happened…

A quarterback draw is a peculiar play call to finish the game. While the idea is to take the easy yardage and leave enough time to clock the ball, there are so many variables that go into a hurry-up play like that. The Cowboys were unable to get the ball spiked, and ended up losing the game without so much as a shot at the end zone.

Following the game, head coach Mike McCarthy defended the decision. He explained that it’s a play the team practices every week, and that he was under the impression that the officials were going to put time back on the clock.

Mike McCarthy said the QB draw on final play with 14 seconds remaining is practiced each week and he was surprised they didn’t get another snap. He was told NY review was likely to put more time on the clock.

He went a little more in depth with the process, as well.

“We shouldn’t have had any problem getting the ball spotted,” he explained to the media.

"That was the best option ... it's the right decision."

The key to the failure was the fact that the referee had to touch the ball before the play could start. Once the offensive line had set themselves for the snap, the ref had trouble getting to the ball, and the final few precious seconds ticked off the clock.

Some Cowboys fans, like Skip Bayless, were quick to blame the refs. While you could make the case that the refs should be more prepared for anything, the QB Draw was a baffling play call to begin with. Like we previously mentioned, it’s a decision that leaves for a lot of variable.

Yeah but do they practice it with 14 seconds left? That was just an awful, awful play call.

They practice it every week? they managed to do everything wrong.

Dak ran too far, then set the ball himself, then the Oline blocked the ref from being able to get to the ball. Literally everything they could have gone wrong did go wrong.

1st..the clock changed from 38 to 40 seconds before the punt.
They blocked the ref from spotting the ball, cost them a second and then the ref tried to give it back by going to the defensive side of the L O S instead of his normal spot.
Cowboys lost because of STUPIDITY.

Do they practice the part where the official has to actually touch the ball?

Because that's kind of important

Why? The reason the clock ran out, Dak ran too far, then he handed it to his center to spot the ball, not the official, and then Dak and the lineman blocked the umpire from getting to the ball. All on Dallas. If Niners caused the delay they would have added Tim, but all Dallas

Ahhh the old end the practice with the exactly 14 seconds left QB sneak.

Didn’t look like they had practices this play, correctly, ever. pic.twitter.com/46CFDPlLrt

Who the fuck throws the ball and stops the clock several times and then decides to run the qb of the middle?