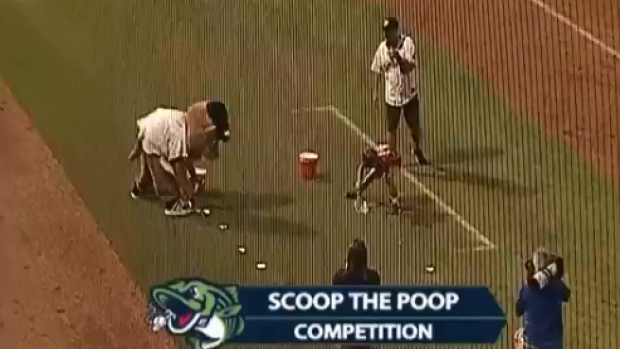 Chalk this up as one of the stranger activities you'll ever see out on a ball diamond.

The Gwinnett Stripers, the Triple-A affiliate for the Atlanta Braves that play inside the metropolitan area of Atlanta, hosted the final installment of their  "Bark in the Park" promotional series on Thursday night. Bringing your mutts to the ballpark is nothing new in the world of minor league promotions. But one of the games they decided to do with the dog owners and a group of kids was something extremely out of the ordinary:

Scoop the poop. It's exactly how it sounds, folks. You run with a pooper scooper and pick up poop off the grass against the Stripers' mascot. Who can pick up the poop the quickest? Let's find out.

There were bound to be a few surprises left after Bark in the Park...

The guys competed to see who would be the lucky one to do the honors! pic.twitter.com/8w5B0rObOp

Okay, it's not actually real poop, but nonetheless, it's still pretty strange to see those little kids picking up fake "lawn chocolates" off a baseball field.

Was that boy training for his summertime job?

That wasn't the only dog-themed "game" of the night. Others included a dog-food eating contest where contestants went down on their hands and knees and ate from a bowl, musical dog beds, and a dog bone race.

When you're running out of ideas, why not make have a bunch of kids pretend that they're scooping up dog crap and eating as if they were a dog?

(h/t For the Win via The Gwinnett Stripers)