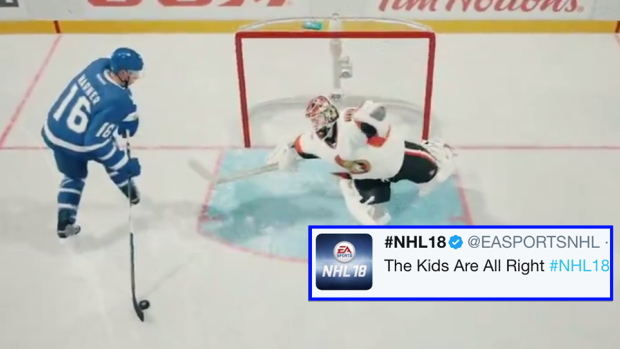 Fans of EA Sports' NHL video game franchise have had to sit around and watch other sports video games release trailers and cover athletes over the past month.

Days after winning another #ChampionsLeague title, #Ronaldo has been named the cover star for #FIFA18. (📷: @easportsfifa)

Wednesday, though, patience paid off as EA Sports released the first look at NHL 18, and Toronto Maple Leafs fans will love the teaser because it features one of their young stars.

The Kids Are All Right #NHL18

On a scale of 1-10, how pumped up did you get watching that trailer?  If we're being honest, we're at an 11 on the scale right now.

While the first look doesn't reveal a whole lot in terms of gameplay and controls, it does reveal a couple of things.  For starters, Marner has his mouth guard hanging out of his mouth.

As you may have noticed, the dekes are also new, and the last one Marner pulls off is straight out of Pavel Datsyuk's playbook.

There's a reason they chose to use footage of Marner dangling a Senators' defenceman en route to scoring a highlight reel goal rather than showing big hits and fights.

There's a youth movement right now in the NHL, and Marner and his teammates are at the forefront of that movement.  Clearly EA Sports is planning on showcasing youth, fun and excitement in NHL 18, and we're pumped about that.

We hope youth is the theme for the cover athlete for the game as well, but if it's not, we have other suggestions.