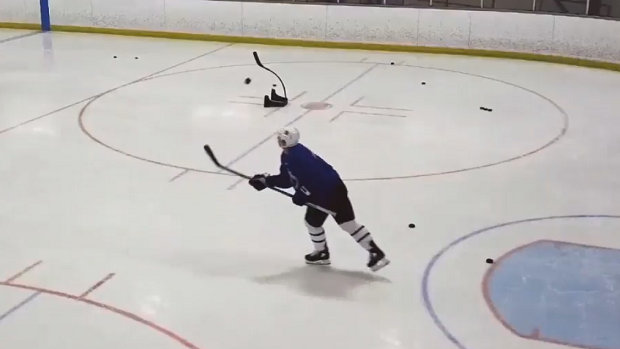 Mitch Marner was one of the many fresh faces to enter the NHL last season and they brought loads of elite skill with them.

With Patrik Laine, Auston Matthews, Matthew Tkachuk, Zach Werenski and many others stepping into the NHL spotlight, the skill level in the NHL has never been higher. Watching players like Connor McDavid skate through some of the best defenceman in the league is fascinating and it makes you wonder how they train.

In recent weeks, we’ve seen a better look at how players like McDavid have reached their skill level, and in terms of traditional hockey drills, they’re definitely unorthodox – Marner’s training is no different.

Mitch #Marner shows off impressive coordination in some unorthodox training. . (Via: Twitter/Paul Marner)

That clip is from a larger video that Marner’s father, Paul Marner, posted on Twitter, and you can get an even better look at the entirety of the young Leafs’ training with 3 Zones Hockey School.

Shout out to 3zones hockey for a great summer session to get @Marner93 ready for upcoming season.🔥🏒 pic.twitter.com/QwQugJYWnF

The springboard is definitely a twist to any traditional drill, but clearly they’re doing something right. Not only have they helped train Marner to become the player he is, but they’ve also trained with Sam Bennett and Christian Dvorak.