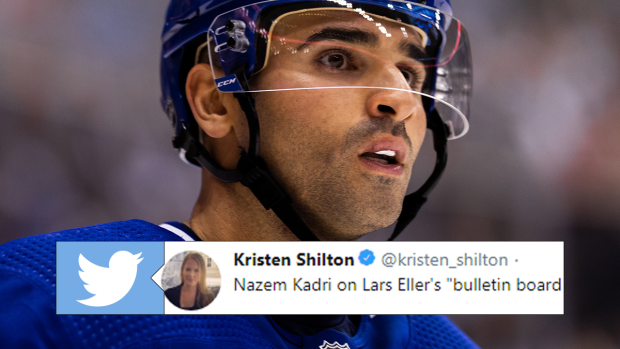 The Leafs are the hottest ticket in the NHL right now, but not everybody has been impressed with them.

Lars Eller made headlines across the NHL over the weekend when he was asked about trying to contain the Leafs players and he was not thoroughly impressed. The Leafs’ top power play unit has led the team to the second best power play rate in the league (47%), so it’s hard to argue with how dangerous they’ve been so far, but Eller thinks that when compared to Crosby and Malkin, nothing compares.

Nazem Kadri heard about those quotes on Monday morning and he considers that bulletin board material.

Nazem Kadri on Lars Eller's "bulletin board material" comment on Saturday: "I don’t know how he can be serious with that comment, but I understand they’re coming off taking a banner. You’ve got to give teams respect that have earned it, and I certainly feel we’ve earned it." https://t.co/nPQq4IvF4Y

Lars Eller on the Maple Leafs: "We were just playing against Crosby and Malkin, so everything kind of drops off from there. It's not that special, to be honest. It's a good team, like a lot of others. They'll probably be a playoff team, I would think."

Kadri is one of the players on the team that makes them even scarier.

He has scored 32 goals in each of the past two seasons, and he has yet to contribute any goals this year. Even if the big guys do start slowing down, it’s possible that the depth in lineup starts picking up some of the slack. Kadri, Zach Hyman, Patrick Marleau and Andreas Johnsson are all still goalless on the year, so it will be interesting to see how their scorers continue to contribute throughout the year.

TSN's power rankings already have the Leafs at #1, which we're sure will be some bulletin board material for other teams.