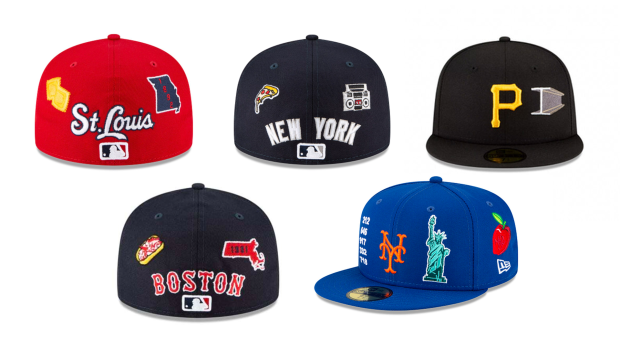 Baseball fans may not agree on everything, typically they don’t. But following the release of New Era’s latest line of “Local Market” inspired MLB caps, fans were able to join forces and agree that they did not like the hats one bit.

So much so that New Era even went and removed the caps from their website.

The hat design was predominately made up of the team logo, city area codes, franchise success, and staple items the city is known for.

Though a large deal of dismay was felt by fans due to certain area codes being represented on their team caps. Teams such as the St. Louis Cardinals and Tampa Bay Rays didn’t even have the area codes of the team’s stadiums. The Pittsburgh Pirates didn’t even include an area code! Do they not have phones in Pittsburgh?

In addition, a lot of people were not happy with the way their cities were represented. Both New York Teams had the same big apple and Statue of Liberty patches, as the Cardinals had a ravioli, Toronto a poutine, and we think the Braves had a UFO.

Though it was baseball fans online who truly had the last laugh on these caps.

There is a lot going on with some of these local market hats but I think my favorite detail is the range in area code representation—7 different ones for the Twins, 8 for the Cubs, 9 for the Braves, and *zero* for the Pirates??? pic.twitter.com/G0kKXp5TE3

The fact that MLB put nine whole area codes on the Dodgers’ local market hat, then turned around and put a single incorrect area code on the Rays’ is just hysterical.

And then they got bullied and pulled the entire line. pic.twitter.com/rBhQcaeHCZ

What I learned today from the "Local Market" hats debacle is that New Era's design team literally never gets to leave the building, doesn't have internet access, and were forced to imagine what each place might be like. Also, they really like clip art and area codes. pic.twitter.com/gc2bWFbx9o

The Yankees and Mets local market hats are exactly the same which lets me know that whoever designed them probably has never been to Queens or the Bronx because you could put a million things on them to make them different pic.twitter.com/8nj2Hk6xqr