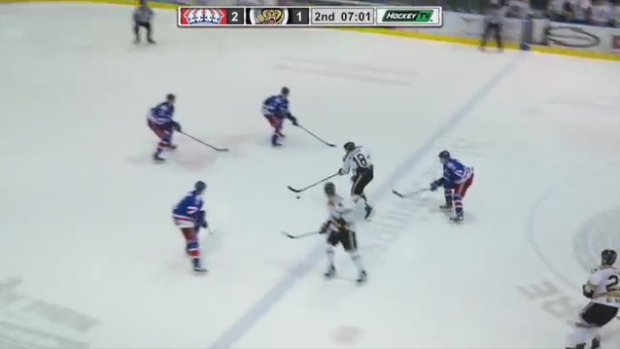 The term “coast-to-coast” is a pretty commonly used phrase when describing a special type of goal in hockey, but for Newfoundland native Alex Newhook, the saying has a symbolic meaning highlighting his journey to the Victoria Grizzlies of the British Columbia Hockey League.

Victoria, B.C. is about the farthest destination from St. John’s Newfoundland to play hockey in Canada, and at the rate Alex Newhook is progressing, he looks to have made the right decision.

The 16-year-old has taken up a scholarship offer from the Boston College Eagles to play NCAA hockey for the 2019-20 season. After seeing the goal he scored on Saturday night, it should come as no surprise as to why he’s already been highly coveted.

With the Grizzlies down 2-1 just over midway through the middle frame, Newhook picked up a loose puck in his own zone, regroups by getting his speed underneath and in front of him, and completely takes off. Newhook cuts through the middle of the ice and three zones and bursts right through all of the Prince George Spruce Kings. He takes advantage of his long stick, drives wide as he gets into the slot, and roofs a backhander over the glove of the Spruce King ‘tendy.

#Newfoundland native Alex Newhook went coast-to-coast, just like his career path, for this goal in the @realbchl over the weekend. @victoriagrizzlies #BCHL . (Via: YouTube/ BlackBearMedia1)

Check out that speed through the neutral zone. What a goal, and what a call.

Newhook has compiled 14 goals and 25 assists in 31 games for the Grizzlies, making him the youngest scorer in the entire league. At 5’11” and 185lbs, it’s no secret that the playmaking sniper could be one of the first 31 players to have his name called at the 2019 NHL Entry Draft.

To further his hockey development, he left his hometown at the age of 14 to play hockey at a prep school in Aurora, Ontario, before making the jump out west. Newhook looks to follow in the footsteps of former Victoria Grizzly Jamie Benn, and become the next great NHL star to come out of Victoria’s program.

Remember Newhook’s name over the next few years, although if he keeps scoring goals like this, then it’ll be pretty hard to forget about him.