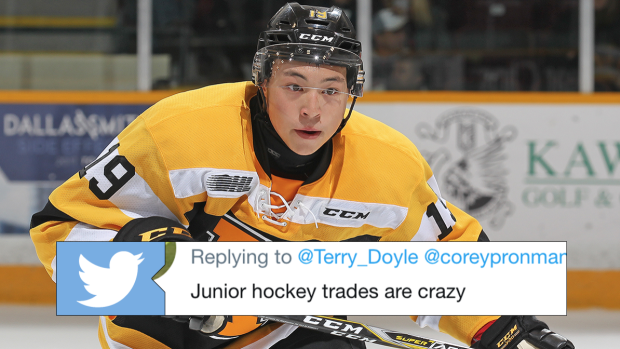 Over the years, we've seen some massive trades go down in the CHL involving future NHL stars and LOTS of draft picks.  On Tuesday, a deal went down in the OHL and it instantly joined the list along with some of those massive deals we've seen over the years.

I would say today's Niagara-Kingston #OHL trade is the first time we've seen the new cap on how far out you can trade picks come into play. 2024 is the current limit.

You're eyes are not deceiving you.  The IceDogs traded 11 draft picks to Kingston along with two of their own players in exchange for Robertson and Pacquette.

Usually with these big trades, draft picks are going both ways and when that happens, the total number of picks exchanged can get to double digits.  11 picks going to one team is insane, though!

Junior trades are crazy, but this might be one of the craziest you'll ever see.  With all of those picks, we'd like to think Kingston's rebuild will be a little faster now than it would have been before the trade.