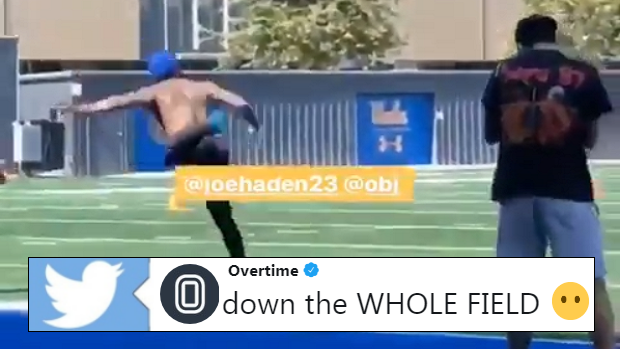 Odell Beckham is a man of many talents. Ridiculous route-running, hands the league has perhaps never seen, and blazing speed. But apparently his most impressive skill doesn’t even involve the position he plays.

OBJ hit the practice field in Los Angeles with Pittsburgh Steelers corner back Joe Haden on Wednesday and left him in complete awe with his arm. The man wound up an absolute bomb and casually tossed a pig the entire practice field. He really put Michael Vick to shame with this one.

Jeez man… That was ridiculous!

Let’s not forget that the 26-year-old has showed off his powerful arm during game action as well. Let’s kick things back to week 5 of the 2018 season against the Carolina Panthers, when he tossed a 57 yard dime to Saquon Barkley for a touchdown in the Giants' 33-31 loss.

In true OBJ fashion, the fun didn’t just stop with the throw. Of course, he took to Twitter to challenge two of the game’s biggest arms to a throw-off. Not so sure this would end all that well for the LSU product but okay.

You can probably expect Browns head coach Fred Kitchens to hit the drawing board after witnessing this.