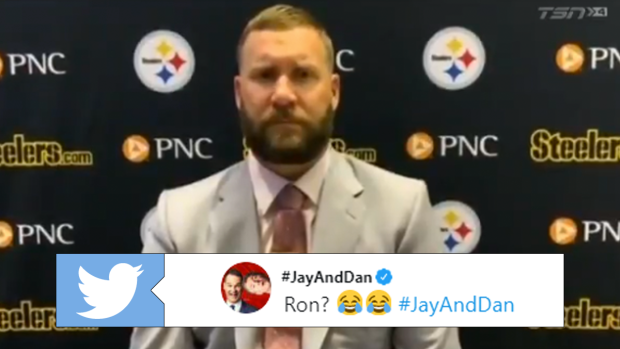 Monday Night Football put a bow on Week 1 of the NFL season with a double header of games, the first between the Pittsburgh Steelers and the New York Giants, followed up by the Denver Broncos hosting the Tennessee Titans.

While both games showed signs of rust from the four combatting teams, it still led to some decent entertainment. We got to see JuJu Smith-Schuster return to form, the revamped Broncos offence go to work, and the faster paced Giants do business. We also got to see the return of Big Ben Roethlisberger on the field, but it was a moment off the field involving Ben that really made fans happy.

Ron Cook is a writer for the Pittsburgh Post-Gazette, and apparently he had some sort of bad connection or possibly a muted microphone. Either way, the lack of question resulted in a hilariously awkward silence it which a stone-faced Big Ben had no choice but to sit through… twice.

A Ron Cook mention on Jay and Dan! https://t.co/UhujaJl4iq

Our man Cookie making it big time in Canada!! https://t.co/dIOtoRPNP3