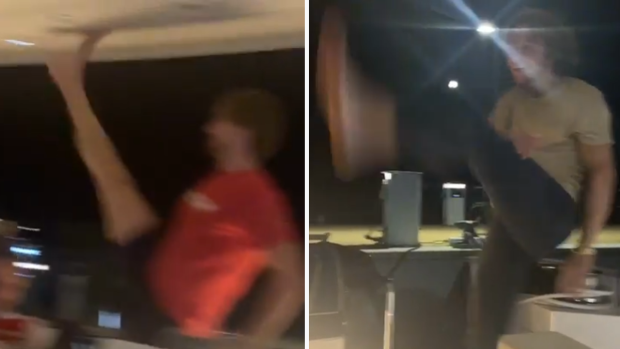 For much of the offseason leading up to July 1, many people in the hockey world thought the former Columbus stars might be a package deal, but just because they signed in different places, doesn’t mean they’re not celebrating together.

Panarin ended up signing with the Rangers while Bobrovsky signed with the Panthers, but they’re both in Italy and they are dancing up a storm. They aren’t the typical dance moves you’ll see shared around social media, but they’re just as entertaining as anything else we’ve ever seen. Just look at those leg kicks. Pretty sure Bob could kick the roof with that kind of flexibility.

As incredible as the video is, we’re not even sure it’s the best Panarin dancing video we’ve ever seen.

It’s also not even the weirdest thing we’ve seen these two do this summer. They posted this after a big win in the playoffs this year.

Not sure what Artemi #Panarin and Sergei #Bobrovsky were going for here but okay 🤷‍♂️ @bardown. . (H/T @sergeibobrovsky)