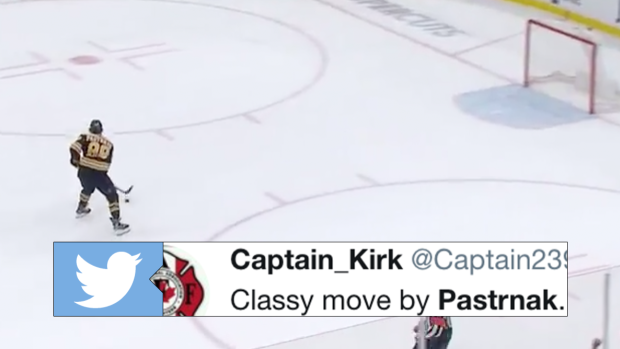 Bergeron was a 2nd-round pick in 2003 and developed into one of the best two-way players in the sport.  He's won a Stanley Cup, Olympic Gold, and if he's not winning the Selke every year, he's always in the conversation.

Simply put, Bergeron has had a remarkable career thus far and in his 1000th game, David Pastrnak made sure he'd give him a moment he wouldn't forget by passing up an empty net goal to let him score.

Pastrnak's empty-net assist to Bergeron should come as no surprise, given the amount of respect No. 37 has garnered in the #NHLBruins locker room.

Brad Marchand, Bergeron's linemate for close to a decade, can certainly attest to it.https://t.co/XIr6I5zSly https://t.co/Uq6rT7g2p8

David Pastrnak is a class act. Had an empty net right in front of him and he makes a drop pass to Bergeron so he can score another goal in his 1,000th game. That play shows how tight knit this team is and the level of respect they all have for Bergy. #Bergy1000 #NHLBruins

What a class act by Pastrnak here. Dropping the puck to Patrice Bergeron so he can net two in his 1,000th #NHL game vs Islanders last night. The little things that make hockey so great, youth showing respect for the veteran on a historic night. #NYIvsBOS #NHLBruins pic.twitter.com/VshIlxcEy0

Pastrnak makes certain to drop back the pass to Bergeron in front of the empty net to make sure 37 gets his 2nd goal in his 1000th NHL game. Chara gives Bergeron a big bear hug as the last two players leaving the ice. So clear how much Bergeron is beloved by all of his teammates

Bergeron had already scored earlier in the game, but that drop pass shows how much respect Bergeron's teammates have for him and he's earned that respect over the course of his career by being an incredible teammate.

Overall, it was a fantastic moment and another reason why we love hockey so much.  That display of teamwork and camaraderie was also fitting because the Patriots, who are the ultimate team, were in the house for the game.