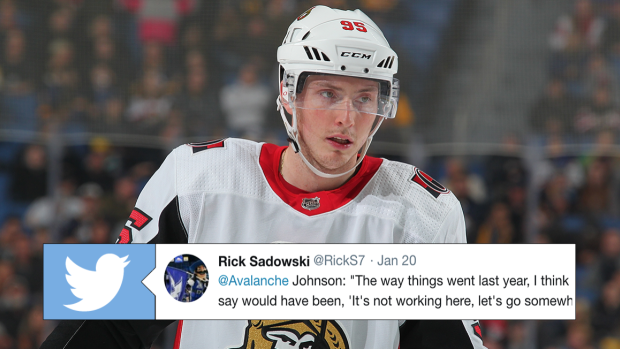 In case you've completely been ignoring the Colorado Avalanche this season based on their disastrous campaign last year,  you're missing out on what could potentially be one of the greatest turnaround in NHL history.

Entering play Monday night, the Avalanche hold the second wild card spot in the West and they've won nine straight games.  Colorado has also won four more games this season than they did all of last season.

The @Avalanche earlier today kept up their role as the NHL's hottest team the last couple weeks, as they stretched their win streak into a tie for 2nd here pic.twitter.com/EGRbW3v9XY

We weren't lying when we said this could be the greatest turnaround in NHL history, especially if the Avalanche can make the playoffs after the year they had last season and after trading away one of their best players in Matt Duchene.

Speaking of Duchene, Saturday after Colorado's ninth-straight win, Erik Johnson talked about how the team has been able to find success after such a tough season a year ago and people are convinced he took a not to subtle shot at Duchene.

@Avalanche Johnson: "The way things went last year, I think the easy thing to say would have been, 'It's not working here, let's go somewhere else, let's jump ship.' The character guys and core guys in this room said we want to figure things out here in Colorado, make it work."

The subtle shot is about saying it's not working here and jumping ship as Duchene reportedly asked to be traded last year and finally got his wish early this season.

Very subtle dig to Dutchy right there. Love ya Condor!

Very interesting quote. This team is building something special. Hope it continues to build as they head out on this brutal road stretch! https://t.co/KZWn47Tnn0

Ever since he was traded, though, the Avalanche and Nathan MacKinnon have been on another level.