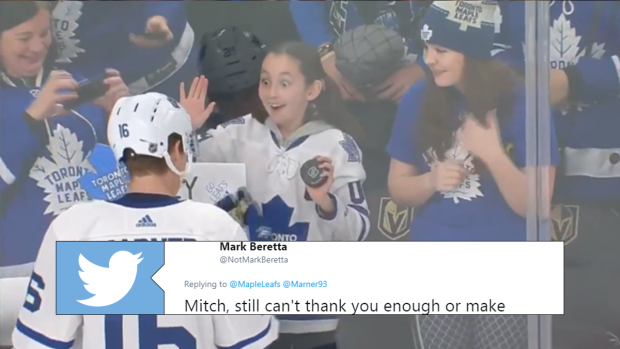 The Toronto Maple Leafs were in Las Vegas for a game against the Golden Knights on Thursday, but before they dropped the puck, Mitch Marner made sure to show a young fan some love on Valentine’s Day.

From Mitch Marner, a happy Valentine’s Day to this young fan 😂 • (🎥: Twitter/junotheleafs)

You can love the Leafs and you can hate them, but it sure is hard to hate on Marner for being a class act and making a fan’s day.

The young girl’s father took to social media to thank Marner for his time, and also shared the photo of the two together. It’s simply adorable!

Here’s the fan from yesterday that got a photo with Marner 😂 • (📸: Twitter/NotMarkBeretta)

Mitch, still can't thank you enough or make you understand how far a moment of your attention goes. She's still gushing at all the attention and knows she's a very lucky girl. We'll be at the glass tomorrow to cheer you on again. Go Leafs Go! #LeafsForever #LeafsNation @NHL pic.twitter.com/1NjNb2ii2U

Hey @Marner93, you did for my 9 year old what Wendel Clark and Russ Courtnall all did for me when I was 9... You made a leaf fan forever. Thanks for being a good guy #leafsforever pic.twitter.com/8MWx6HA3ds

It’s a very cool moment, and according to Beretta’s tweets, they’ll be in town for the Leafs’ next game on Saturday, a road affair against the Arizona Coyotes. The games may be temporary, but we’re sure that Marner has made a fan forever.