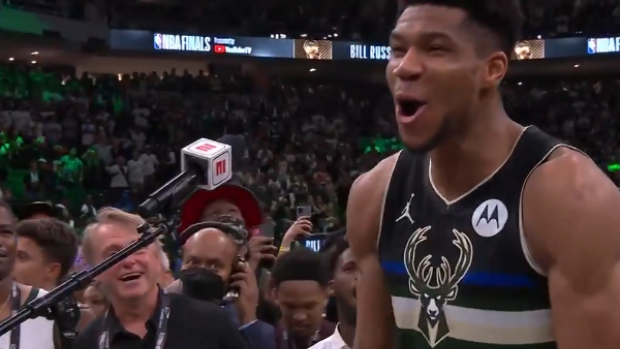 Giannis Antetokounmpo can finally call himself an NBA champ! The 26-year-old two-time MVP extinguished playoff demons and won the big one. He did so on the back of a 50-point Game 6, one of just a handful of legends to do so.

That’s not necessarily the reason why Giannis is so beloved, however. The “Greek Freak” is also just a likeable personality, and a guy that decided to build a championship rather than join one. He’s known for being charming and goofy, and nobody gives a sound bite quite like Antetokounmpo.

After winning the Finals, Antetokounmpo stepped up to the mic and did what he does best; entertained.

But then he went on to tell a funny tale about how family dinners had been a little awkward since his brother Kostas won a ring last year.

Giannis and Thanasis can celebrate with Kostas at the dinner table now 😂 pic.twitter.com/WKI38m7w8F

After he’d left the court and took the podium a while later, the shenanigans continued. An animated Giannis has a number of hilarious jokes and moments, but none were funnier than him speaking about his free throw shooting.

Giannis went 17/19 in Game 6 after taking heat all playoffs long, and he wanted everyone to hear about it!

Giannis wants everyone to hear about how he went 17/19 from the line after taking heat all playoffs for his free throw shooting. 😂😂 pic.twitter.com/Mbptj0yRsV