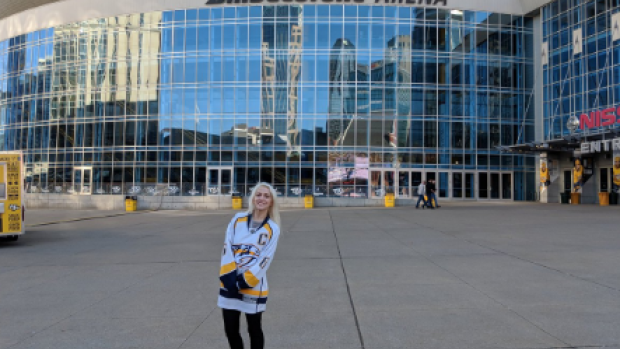 A Predators fan from Philadelphia made a costly mistake when she misread the Nashville Predators schedule and traveled to the Music City thinking the she was going to see her team take on the New Jersey Devils.

There was just one problem: the game took place from New Jersey at the Prudential Center, and Sydney Saunders was standing right outside Bridgestone Arena, wearing the Preds white away jersey.

WHEN YOU'RE A COMPLETE MORON AND YOU BUY A FLIGHT TO NASHVILLE TO GO TO THE @PredsNHL GAME BUT IT'S AN AWAY GAME SO YOU HANG OUT AT BRIDGESTONE ANYWAY pic.twitter.com/dzgjoZassd

Turns out, it wasn't too costly after all, as the Predators organization picked up on her mess-up and provided her with some official Preds swag. Based on some of her Twitter replies, it looked like some fellow Preds fans invited her out to watch the game at a local Nashville bar.

LOOK AT WHAT I GOT Y'ALL 😭💛 pic.twitter.com/arzUF3GKd4

Good on the Preds for stepping up and making her day after she felt incredibly silly.

It so easy for a troll to sit behind their keyboards and smartphones and roast Sydney for what she did, but let’s take a moment to recognize Sydney for admitting her screw up and actually putting it out there on Twitter in a self-deprecating manner.

Good on ya, Syd. The Preds went on to shut the Devils out by a score of 3-0 from Newark, not Nashville.