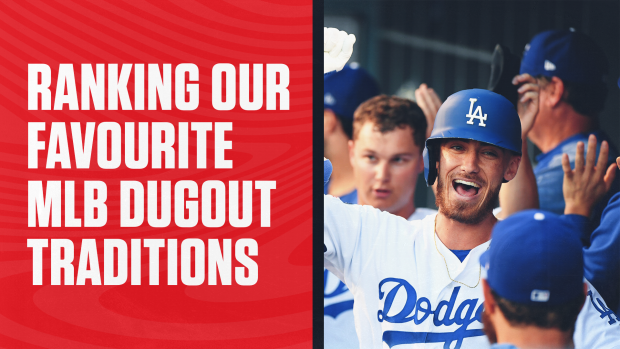 Even though baseball has been around for centuries and is full of tradition, that isn't to say that baseball isn’t fun. We mean sure there are a bunch of rules, especially unwritten ones, and we know the season is much longer than other major professional sports leagues, but that’s the beauty of the game.

But baseball and its players are not only fun, they’re actually pretty hilarious tricksters.

Within baseball, there are tons of traditions that teams use to boost team morale and truly puts the “let the kids play” expression into fruition.

So we thought we’d rank some of our favourite MLB dugout traditions!

This prank is pretty subtle and makes for a humbling experience if you’re on the receiving end of it.

Typically performed on rookies, the silent treatment is exactly what it sounds like. Following a rookie's first major league homer, fellow teammates will remain silent and not pay attention to the said rookie as they enter the dugout to celebrate. This prank turns out even better when players pretend as if they have better things to do than to celebrate the big moment for the batter.

Dig through a bag of sunflower seeds, look at a plane flying overhead, you know, things that are worth your time!

This prank is pretty intricate for taking place within the dugout while needing to be pretty sneaky. A player will attach matches to a teammate's cleat with bubble gum and set the matches on fire.

This is a pretty risky prank but it definitely pays off once seeing the prankee’s reaction.

We just hope this prank doesn’t even happen to us because we know we could not pull it off as cool as these guys.

This tradition of course is not only respective to baseball, but just seeing players get smacked in the face is such simplistic fun.

If seeing someone get a pie to the face doesn't make you even smirk, then we recommend going to a circus because this stuff is timelessly hilarious.

Just the thought of returning to the dugout with a face full of shaving cream is beautiful.

Okay so this one is also pretty universal across all sports, but its tradition within baseball is a staple.

This prank is always fun because it gives you that adrenaline rush whether you're the prankster or prankee.

Though it isn't as good as a pie to the face. If we have to choose one of the two, the pie remains on top.

We’re going to have to give the warning on this one and assume this tradition won’t be used for a while due to its somewhat gross nature.

It’s as simple as it sounds, the player packs a fat lip of bubble gum, blows their best bubble, and very slyly places it upon another player’s cap.

Players are pretty good sports for the most part but just that moment of realizing someone else’s saliva-drenched bubble gum is on your head has us cringing.

We’re honestly pleading players to stop putting their salvia-covered gum on other people. It’s hilarious but it is simply not sanitary!

But in all seriousness, this prank is awesome especially when players and even coaches don’t pick up on it and are walking around getting in the zone for a game, just to realize they look ridiculous.

So there you have it! Here are some of our favourite prank traditions within baseball. There have definitely been a few other hilarious moments such as Joe Carter doing a fan giveaway of Derek Bell’s car, so let us know some of your favourite prank moments within the game!