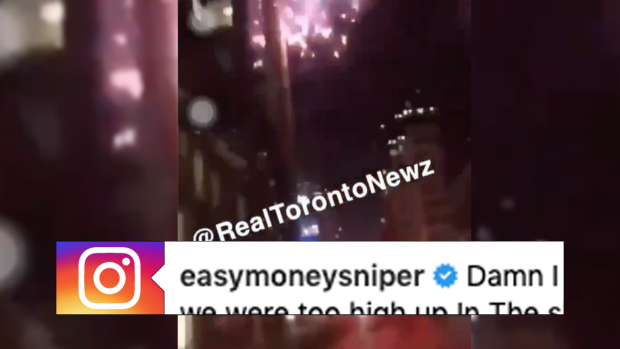 The NBA Finals have arrived in Toronto, with the Raptors taking home court advantage into their matchup against the Warriors.

You know the city is excited for this one, and they’ll do anything to show their pride. Seriously, anything.

The night before Game 1, a few Raptors fans went as far as to set off some fireworks outside of the St. Regis Toronto, where the Warriors are staying, around 3am.

Raptors fans really set off a bunch of fireworks at 3am outside of the Warriors hotel last night in Toronto. 🤦🏽‍♂️

Of course, Kevin Durant has never been one to back down from some trash talk over social media, and Warriors guard Quinn Cook also fired back in the comments.

You know, let’s just say that setting off fireworks in the downtown core is never really an advisable move, and it didn’t really seem to faze the Warriors.

That won’t stop Raptors fans from trying to get into the Warriors’ heads, though. This is really how they’re feeling right now.

The streets of Toronto WILD!