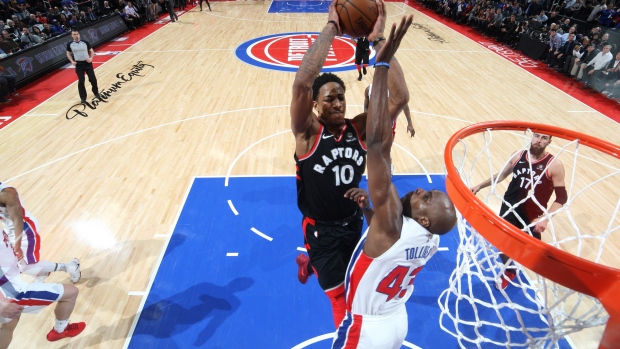 If you watched Wednesday night’s game between the Toronto Raptors and the Detroit Pistons, then you would’ve caught one of the top dunking moments of DeMar DeRozan’s career. It was key to an effort that sealed a playoff berth for the Raptors in April, a nice notch to claim in early March during what shapes up as one of the most successful seasons in franchise history.

DeRozan, too, is hitting new personal highs. Though the statistics aren’t as overwhelming as his 27.3 points per game from last season, this year’s version of DeRozan has rounded out his game in the subtle ways most conducive to winning. His game is about many things now, such as passing or even shooting threes, and that takes the Raptors much further than “just a dunker” ever would.

But, yeah, let’s celebrate DeRozan by watching some dunks.

5. Literally in the playbook

This alley-oop, initiated by Kyle Lowry just seconds after crossing half-court, is impressive for being that, but it’s also impressive for being that consistently. This is a set play that the Raptors run, catching unaware defenses in the act by sending DeRozan backdoor early. Not many teams have the personnel, or the audacity, to put this set in their playbook. For the Raptors, it’s routine.

The putback poster dunk is a rare treat, because it relies on many things happening at once: the miss, the lane, the timing, getting the actual rebound and somebody being there to dunk on. Maybe if Myles Turner had actually, you know, jumped, he wouldn’t have left himself in the position to be yammed on. He kind of dunked on himself, if you think about it.

Has everybody dunked on Timofey Mozgov? Somehow able to secure a four year, $64 million contract in 2016, Mozgov may not actually have either the athleticism or instincts to be anything more than a 7’1 dunking target. It’s hard to say this DeRozan dunk compares to the Blake Griffin version, but there’s some quality shame being handed out here.

Let’s rewind to the game scenario from Wednesday. Ten seconds from losing the game by a single point and with no timeouts to advance the ball, DeRozan coasts this one down the court and yams it right on Anthony Tolliver’s head for continuation. Lowry freaked out, and DeRozan dead-panned as one does when they have no regard for human life.

This wasn’t quite the climactic finish that it appeared to be, as the Pistons got a bucket to send it to overtime on the ensuing possession, but the Raptors still secured the win thanks to continued work in the clutch from DeRozan. Watch greatness work.

Rudy Gobert is a big boy. Before he was drafted in 2013, he had his own official website that advertised his measurements, which are entirely worth advertising. He stands 7’2, with a 7’9 wingspan and 9’7 standing reach. That means he can basically dunk without jumping! And he’s no stiff, either. He was last season’s leader in blocks, and arguably one of the best defenders in the NBA.

That’s the guy that DeRozan dunked on. There’s some very real, very disrespectful tomahawk action going on there. It’s a ferocious dunk on one of the hardest players to dunk on, without any caveats that could be said of Gobert’s positioning or anything. Nah. This is one of the most well-earned, savage poster dunks that we’ll ever get to see.