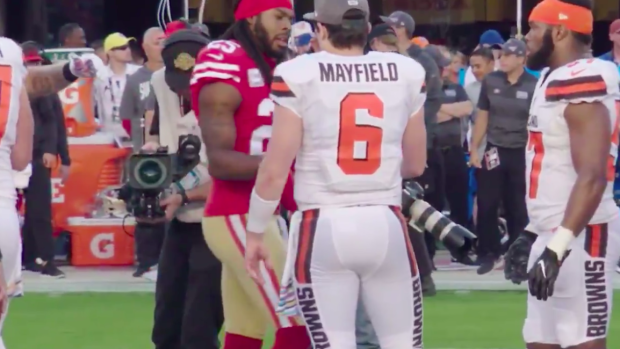 There was some drama between Richard Sherman and Baker Mayfield in the fallout from Monday Night Football, when Sherman accused Mayfield for refusing to shake hands before the pre-game coin toss.

Sherman to me after game: “(Mayfield) hasn't earned anything in this league. How many games has he won? He's acting like he was the MVP last year. If (Patrick) Mahomes did that, it would be one thing. But he would never do that, because he has too much respect for the game."

After the topic began to circulate on Twitter, and Sherman doubled down on his opinion in response to detractors, video evidence did emerge of Sherman and Mayfield shaking hands before the game.

Sherman apologized on The Pat McAfee Show, saying that he misremembered the interaction and that he’ll reach out to Mayfield personally to own up to his gaffe.

So Richard Sherman claims Baker Mayfield refused to shake his hand at the coin toss. This video seems to indicate otherwise: pic.twitter.com/4CgOsLKLPL

Sherman previously said on Twitter, in a change from his original version of events where there was no handshake at all, that he had taken offense to the way that Mayfield had shaken his hand.

So you don’t see any difference in the way I shake everyone else’s hand and the guy who stands back with the petty shake. Was Bs and I took offense to it then turns and runs off. It’s not that big of a deal.