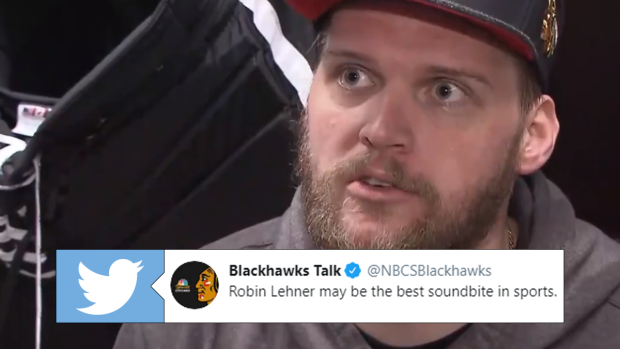 Over the last season and a half, Robin Lehner’s journey in the NHL has been one of the most inspiring we’ve ever heard. Battling substance abuse and depression is no small feat, but he seems to genuinely be happier than he was before, and his play in the crease has improved as well.

While a timeshare in the New York Islanders crease was good to him, he’s proven it wasn’t a one off this season. Now manning the blue paint in Chicago, Lehner has posted an impressive .938 save percentage in 13 appearances. Unfortunately, there’s one part of his game that continues to haunt him.

The shootout. That darn shootout.

All the experts in the media on what my new shootout strategy should be:) I’m all ears. The shootout is not hockey so I gotta learn this sport somehow and hopefully one of the experts can help me as all my goalie coaches haven’t been able to yet. Sabres fans would love to hear

On Monday, Lehner spoke with the media about his shootout struggles. In an extremely candid soundbite, Lehner aired it ALL out.

Robin Lehner may be the best soundbite in sports. pic.twitter.com/2HqovYDI2K

It’s always nice when players have the guts to tell the media how they really feel, and overall it seems like fans are pretty supportive of the Swedish goalie.

Robin is such an awesome dude. Totally transparent. Best goalie in the league!!

So nice to have a pro athlete so willing to speak his mind and cut out all the excuses and cliche hockey jargon. Love this guy I hope the Hawks sign him long term after this season.

I LOVE that he spoke from his heart and not the robotic things Athletes feel “required” to say to the public! You’re doing a GREAT job @RobinLehner ! I’m behind you & the Hawks❤️🏒 let’s go!