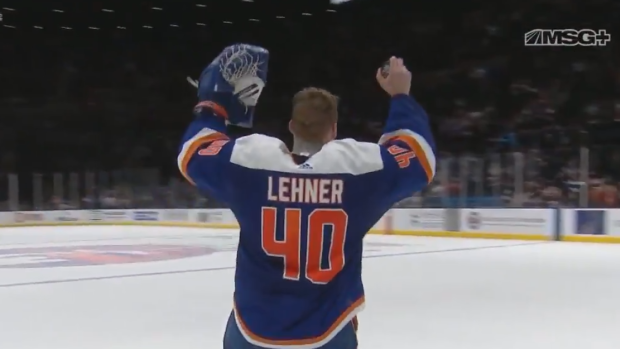 Ten months after leaving midway through a game due to what he later described as a low point in his battle with bipolar disorder, depression and an alcohol dependency, Robin Lehner finds himself in the midst of an especially inspiring career and personal turnaround.

As he explained in an essay for The Players’ Tribune, Lehner entered into rehab and made enough progress to earn a contract with the New York Islanders in the offseason. Since then, he’s shined in net for the Isles, who have been especially hot of late.

On Sunday, Lehner and the Islanders won their fifth consecutive game in a 3-0 shutout of the Anaheim Ducks, and for his part, he was named the game’s first star. With chants of ‘Lehner’ and a standing ovation from the home crowd, this one was an especially emotional performance, as the fan support for Lehner has been tremendous all along.

Robin Lehner, being interviewed during raucous chant of his name by Nassau Coliseum crowd: ‘This is amazing. This is what gives us energy.’

Robin Lehner and the New York Islanders are the best story in hockey. Try to convince me otherwise.

Barn so loud. Can't beat that energy when it's going. Lehner's been some story this year. Super happy for him as a person, husband, and father #Isles #IslesTwitter https://t.co/4VoMBDguDa

We must protect robin lehner at all costs #isles

Lehner is an Islander and we love him. #Isles

Lehner leads the NHL with a 2.11 goals against average, and also ranks second in save percentage (.928) and shutouts (3); the strong play in goal from Lehner as well as Thomas Greiss is a significant reason behind the Islanders’ Metropolitan Division-leading 62 points. The success on the ice is fantastic, of course, but it only underscores what would be a great personal outcome to see for Lehner under any circumstances.

Just two weeks ago, Lehner made his return to the Buffalo Sabres’ KeyBank Center for the first time since leaving that fateful game ten months ago. As he described it, it was mentally one of the most difficult games that he’s played in his career (and understandably so).

Ex-#Sabres G Robin Lehner on return to Buffalo in #Isles 3-1 win: "It was a little weird...It was probably the hardest game I’ve played in my career. I don’t know why. It was a really weird feeling for me. I struggled mentally a little bit in the beginning of the game."