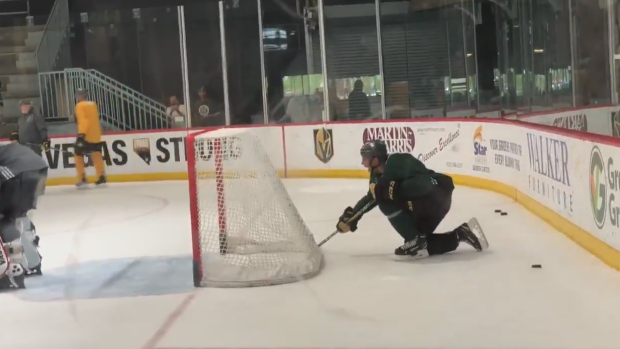 You don't often see pending unrestricted free agents re-up with their team, but in Ryan Reaves' case, he just couldn't leave the Vegas Golden Knights organization after the expansion club shattered expectations last season by falling two games short of winning the Stanley Cup.
The Golden Knights re-signed the enforcer to a two-year contract worth $5.55 million for an average annual value of $2.775 million per season.
During the Golden Knights practice on Sunday, Reaves was up to his old tricks again by impersonating the goal siren, and once again, it's freakishly spot on.

You can beat Malcolm Subban and all the Golden Knights' goaltenders just love hearing Reaves screech that out.
“I am the songbird of our generation,” Reaves said to Jason Mackey of the Pittsburgh Post-Gazette in December 2017. “It’s a hidden talent that nobody knows about yet. After I’m done with hockey, I’ll be going on to American Idol.”
The hockey world knows all about it now and is forever grateful for it.
Can we now add it to this soundboard? You'll notice that the Golden Knights aren't listed. Perhaps it's time to add in a Vegas version and get Reaves his own spot.  http://wejustscored.com/