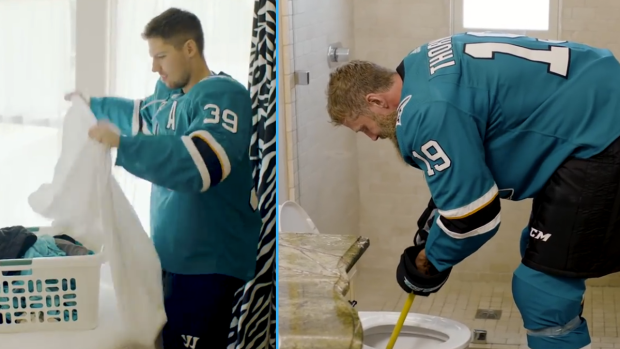 The San Jose Sharks honestly seems like the team to be on. While they haven’t gotten off to as great a start as they were hoping, the Sharks should be able to right the ship and make a serious charge for the Stanley Cup. After all, they’ve been a contender for years, and that was before the addition of one of the league’s best defenceman in Erik Karlsson.

On top of their on-ice potential, it also just seems like a ridiculously fun place to play. The only cold climate they really have to deal with is when they enter the rink, and the group of guys seems to genuinely have a good time with each other.

Their marketing team isn’t half bad either, and the Sharks have become known for their hilarious advertising. The #SharksForLife campaign puts fully dressed Sharks players into off-ice situations for some comedy gold.

The latest two ads feature Logan Couture, Joe Thornton, and Joe Pavelski in the first, and Joonas Donskoi, Barclay Goodrow, and (once again) Joe Thornton in the second. The whole theme is that the Sharks are no fun in your home, so come watch them at “our” home (SAP Center in San Jose).

These guys need to keep doing what they’re doing off the ice, with maybe the incorporation of Karlsson.

Now they just need to start winning some more games…