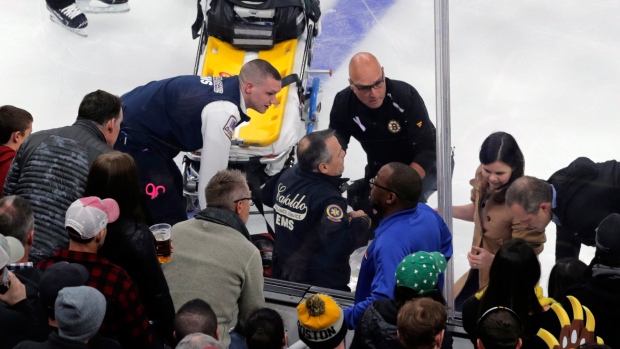 It was a scary scene at Saturday’s Senators game, when Scott Sabourin was stretchered off the ice after suffering a scary injury against the Bruins. Both benches emptied in a heartwarming scene as players came over to show their support for the 27-year-old, and Sabourin gave a thumbs-up as he left the ice.

Really nice moment here. All the players left their benches to give Sabourin stick taps.

Sabourin gave a thumbs up as he left the ice too. Hope he’s OK. pic.twitter.com/SLAgz2YiGL

According to the Sens, Sabourin was conscious and speaking to doctors as he was transported to the hospital, where he’ll continue to stay as the rest of the team travels to New York for their next game.

It’s a scary situation, but Sabourin is cheesin’ through the pressure. Look at this guy! He doesn’t look as pretty as he did this time a day ago, but he’s an absolute warrior.

We’re sending Sabs well wishes. This is the 27-year-old’s first year in the NHL after spending the last few years grinding at the AHL level, and it’s just devastating to see him go down like this just 11 games into the season.

Sabourin has tallied a goal and an assist so far this season.

"It's very unfortunate," said coach D.J. Smith. "You don't want to see anyone _ anyone on either team _ laying motionless like that on the ice. Our players were emotional and so were their guys. It's just an unfortunate situation." #Sens

When asked about every player on both teams standing close by when Sabourin was taken off on a stretcher, Rask said: "In any sport, for that matter, if something so series like that happens humanity takes over and you forget about the game for a minute."