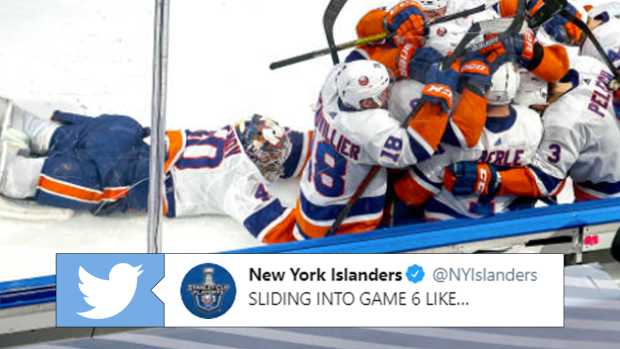 The New York Islanders managed to stave off elimination by somehow surviving holding their breathe for nearly two full overtime periods. Down 3-1 in the series, Jordan Eberle netted the game winning goal to force a Game 6 vs. the Tampa Bay Lightning.

While Eberle may appear the hero on paper, anyone that watched the game would know that there was another hero on the ice. On the blue ice, to be exact.

Isles goaltender Semyon Varlamov manned the crease to near perfection on Tuesday, stopping 36 of 37 attempts from the Bolts. On the other end of the ice, his Isles only managed to take 24 shots in over four and a half periods. Luckily for Long Island, two goals was enough to win it in the end.

After Eberle scored the winner, the celebration of the night also went to Varlamov, who went barreling down the ice as fast as he could before sliding for what seems like 10 kilometres on his belly. It was incredible.

Semyon Varlamov sliding into Game 6 after stealing the show like... pic.twitter.com/UpPFbSTUgk

With both Varlamov and Greisse offering up big games for the Isles, it will be interesting to see coach Barry Trotz’s approach. One thing’s for sure, the Isles are a dangerous team if they have play in the crease like they did tonight. Anyone is, for that matter.