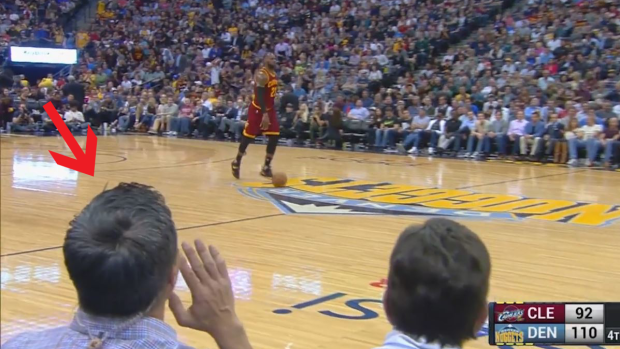 Sideline reporters have some of the best seats in the house at live sporting events, as it allows them to be right next to the action so that they can provide up to the minute updates. The seats also happen to be prime real estate for heckling, although you really wouldn't expect a sideline reporter to engage in that sort of behaviour. Unless it's this reporter from Denver.

Wednesday,  with the Cleveland Cavaliers in Denver facing the Nuggets, a reporter at the Pepsi Center decided to do a segment on how to troll opposing players. With LeBron James set in his sights, Vic Lombardi of Altitude TV yelped out a LaVar Ball chirp.

The Nuggets ended up defeating the Cavaliers, so perhaps Lombardi's chirp did end up having a lasting impact on LeBron. But probably not. In case you missed it, earlier this week LeBron James issued a forthright response to LaVar Ball's claim that his sons are set up better for success than King James' kids.

LeBron was not pleased with LaVar Ball.

Now there's a game of one-on-one that would end even quicker than this one.