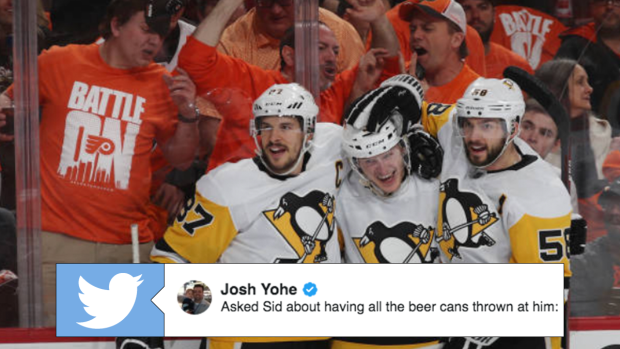 Another chapter in The Battle of Pennsylvania has officially come and past, with the Pittsburgh Penguins emerging victorious in a vicious six-game series over the Philadelphia Flyers. As you can imagine, the Flyers' faithful took a loss to their interstate neighbours pretty hard.

The fan base is already known for their rowdy antics that spans across all four of their sports. Even when the Philadelphia Eagles won he Super Bowl the city got trashed as a result. On Sunday, the Flyers fans in Wells Fargo Center lived up to their reputation and began throwing cans of beer on the ice. When asked about it after the game, Sidney Crosby had a funny take on the matter.

Asked Sid about having all the beer cans thrown at him: "Those things were full. What a waste. Guess they have to be full to throw them that far."

No matter how much Flyers Nation tries to agitate Crosby, the Kid never seems to let it bother him. Earlier in the series they tried to get in his head by putting pictures of him in Wells Fargo urinals throughout the arena.

​In the end, Crosby gets the last laugh. The ice and urinals will all be cleaned out by the end of the night, but Crosby has at least another round of playoff hockey to play.