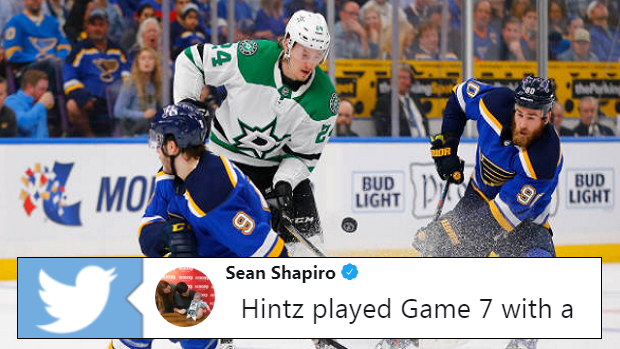 The Dallas Stars are officially in healing mode.

Injuries always seem to surface after a team’s season comes to an end, and let us tell you that the Stars were NOT an exception. We know Mats Zuccarello has been dealing with pain in his arm since breaking it in his first game with the Stars (talk about bad luck), and Mattias Janmark was in and out of the lineup after breaking his foot in February. But a player who stepped up big time for the Stars was apparently dealing with a nasty injury of his own.

According to The Athletic’s Sean Shapiro, 22-year-old forward Roope Hintz played through a broken foot in Game 7. The Finn still managed to log in 23:35 minutes of ice time in the contest.

Hintz played Game 7 with a broken foot. Janmark broke foot back in February or March and it kept getting aggravated. Zuccarello break was healed, but tendons were struggling and got injections before each game.

Fans made sure to commend Hintz for playing through the pain.

Roope is a warrior. What a stud, didn’t even look slow either.

Broken foot and he still looked like the fastest player on the ice. My goodness

still the fastest guy on ice....crazy

Much respect to the warriors on that Stars team.

Absolutely incredible how good he is even when hurt. Looking forward to a full season of Hintz next year.

Hintz has a bright, bright future.

Can someone explain to me how you skate on a broken foot?

This why I love the @NHL playoffs! These dudes are beasts and will play thru anything in the playoffs.

Hintz likely endured the injury after blocking a Brayden Schenn shot in Dallas’ 4-1 loss last Sunday. After briefly leaving the game, he returned to action but was spotted rocking a walking boot afterward.

Roope Hintz was wearing a boot on his left foot. Likely precautionary after blocking a shot yesterday, but Joel L’Esperance was also at the airport today for the Stars flight to St. Louis.

Hintz wasn’t the first, and wasn’t even the last player to grind through an injury in a Game 7. Colorado superstar Nathan MacKinnon was forced to temporarily leave the ice on Wednesday night against the Stars after awkwardly going into the boards, but was ultimately able to return. Guy’s a straight warrior.

Nathan MacKinnon toughed it out in Game 7 😳

We’re sure more injuries will surface as teams continue to get eliminated from the postseason.