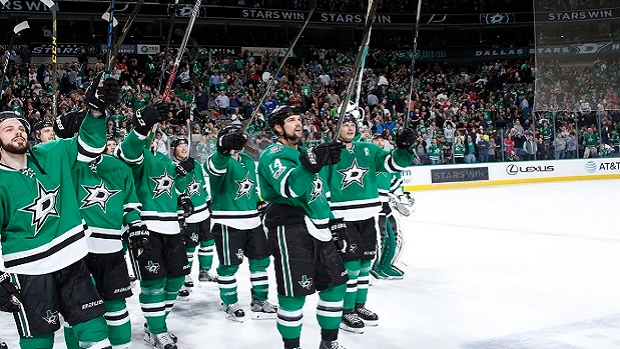 Despite things not going their way this season, there was no way they were losing against the Tampa Bay Lightning on Saturday. The team’s TV play-by-play announcer Dave Strader made his season debut in the booth on Saturday night after undergoing cancer treatment, and the Stars made it a special night for him.

Familiar position...it's been 283 days but I feel ready! Thanks for all the prayers and well wishes. @DallasStars pic.twitter.com/5wibKf8wer

Dallas trailed 3-2 heading into the third period, but thanks to Antoine Roussel’s 11th of the season and third goal of the game, the game went to overtime.

Jamie Benn scored 3:47 into overtime to give the Stars their first win in a week, and the team celebrated the victory by saluting Strader in the box.

Classy move by the Dallas Stars.

And to the great @TheVoiceDS back calling that one was special! Great having you back around the team. #WeSaluteYou #Inspiration pic.twitter.com/b4TpNUwEr8

It’s not the only game Strader will call this season, as he will be in the booth for the next few games.

Schedule of games @TheVoiceDS will work. Will be great to see him at AAC. pic.twitter.com/RNOntFnObT

It’s nice to see and hear him back in the booth. Hopefully he backs permanently in no time.