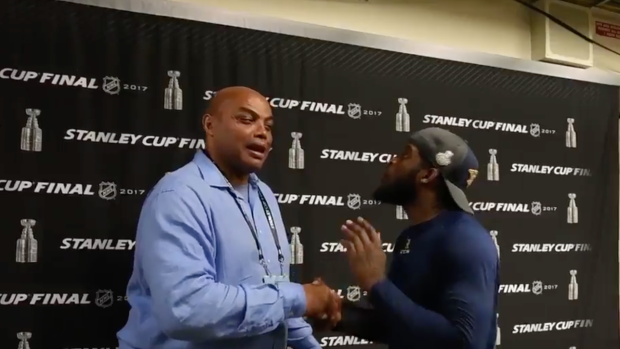 All the stars were out in Nashville Monday night to watch Game 4 of the Stanley Cup final between the Penguins and Predators in Nashville.

Fans expected stars like Carrie Underwood to be at the game, but they couldn't have expected NBA Hall of Famer Charles Barkley to be there.

Charles #Barkley has been a huge fan of the #StanleyCup Playoffs so far.

Barkley crashed Wayne Gretzky's press conference ahead of the game and got to watch the Predators beat the Penguins to even the series at 2-2.

Before the game, Barkley also said he wanted to meet P.K. Subban.

Charles Barkley has his eye on a few big names for tonight's game.

After the game, he got his wish as the two met and talked.

After the win, P.K Subban and Charles Barkley having a friendly, animated conversation.... https://t.co/cEmZdxc5gS pic.twitter.com/LSMiREK3XY

Subban chatting with Barkley after the game. pic.twitter.com/KquD41JPFB

As cool as pictures of the two together are, though, there's a video of the two chatting and you can just tell how excited Subban was to meet Barkley.

Subban was like a little kid on Christmas morning meeting Barkley and that's what sports is all about.

Charles didn't only meet Subban, though.  Apparently Kris Letang asked for a picture with him, too.

Clearly Barkley took the hockey world by storm and fans and players absolutely loved it.

Even if he doesn't show up to another Cup final game, fans know he'll be watching now more than ever as the series is tied and the Warriors lead the Cavaliers 2-0.