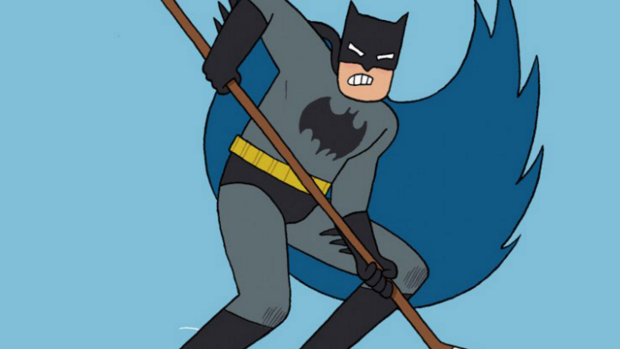 Superhero stories are more popular than ever at the movies and on television these days.

Batman in particular is one of the most well-liked subjects on both screens. From the upcoming Batman Vs Superman movie to Fox's new drama 'Gotham' which focuses on the early days Dark Knight lore.

The legend of caped crusader does not end there. He actually has had many ties to the hockey world as well.

That's why in our first edition of "Super Hero Hockey" we are featuring Bruce Wayne's alter ego. We start with this excellent comic cover from a 1951 Swedish version of the Superman series. Despite being a comic about the Man Of Steel it's an early crossover and features Batman Vs Robin playing hockey. As you can see The Dark Knight is decisively winning 16-2 over his young crime fighting partner. Also of note is Superman's poor performance on the ice, it's not often you see one of the greatest Superhero's of all-time looking broken and defeated. Perhaps skating is next to Kryptonite as another Achilles heel for Kal El.

Hockey is a theme in the North American version of Batman in this 1975 comic. It was titled 'Murder Masquerade!' (Batman #268, October 1975) and features Batman and Robin fighting their enemies on the ice and using hockey sticks. Of course, it's got some great hockey-puns too.

Batman's adventures on the ice did not end there. This time he's laying out some serious cross-checks in another serious battle. The quality of this pic may not be great, however it's clear that Robin is impressed with Batman's goal scoring skills.

In the cinema Batman's popularity has reached new levels. The Dark Knight series in particular has created fandom beyond what the character has ever seen.

Certain lines from the movies have become cult classics. For example this one from Christian Bale's Batman after he encounters some Batman imposters. One of them asks "What's the difference between you and me??" Batman's response has become legendary.

A less popular Batman and Robin also took to the ice in 1997 as they battled Arnold Schwarzenegger's Mr. Freeze. In the scene, George Clooney's Batman and Chris O'Donnel's Robin are surrounded by a bunch of Freeze's Goons on Ice.

They are skating around the duo and attacking them with sticks. This prompts Robin to describe them as the "Hockey Team From Hell". Perhaps more incredible is a scene where the Crime Fighters click their heels in unison and reveal their boots have skate blades on them. Take a look at the whole thing here:

People dressing up as Batman is common. Many people love to dawn the mask or cape in real life to embody the essence of the famous crime fighter. We'd even like to imagine one NHL coach in particular who would look great with a Batman mask

You'll see 'dress up' Batman in many different hockey scenerios. For example a YouTube Batman and a bunch of other superheroes taking part in a great street hockey game from a few years ago.

Speaking of the "Penguins", goalie Ken Wregget wore a mask featuring one of Batman's famous enemies in 1995.

As you can see there is a lot ties to the Hockey world and Gotham's favourite Superhero. All that without even mentioning all the Batman Hockey products. 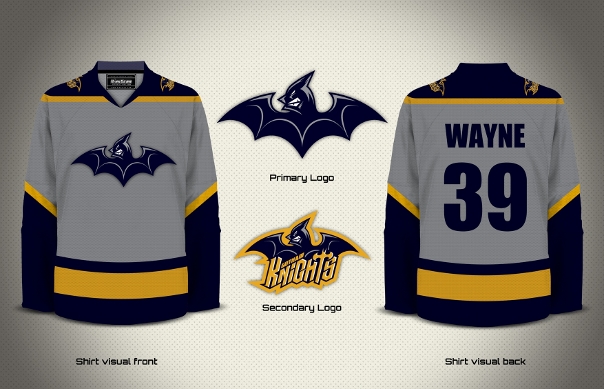 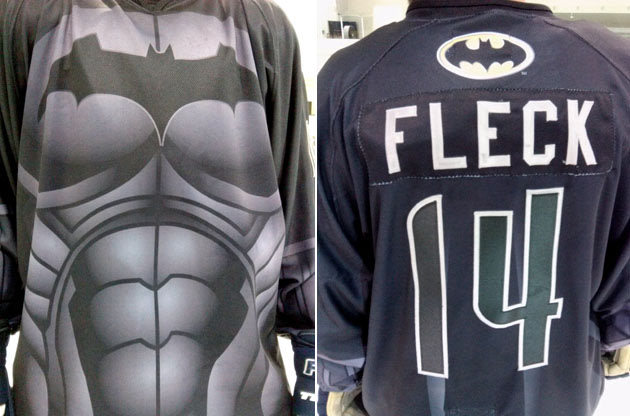 (Via Total Hockey) Batman's Hockey Skills Based on his skill set of being a tough yet remarkably agile hero we believe Batman would be a Power Forward. Think a mixture of Milan Lucic and John Tavares.  He could definitely hit, and probably has an okay shot as well. You definitely would not want to go into the corners with the Caped Crusader. Most importantly his work with Robin shows that he's a team player.