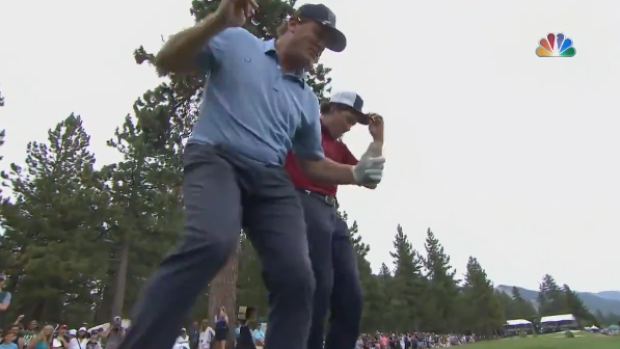 It might be the offseason, but T.J. Oshie is still partying away.

The Stanley Cup winning champion was on hand for the American Century Celebrity Golf Championship down in Lake Tahoe, Nevada, and busted out some dance moves with none other than Jeremy Roenick.

T.J. Oshie (@tjoshie7) is still partying, this time with @jeremyroenick at the Celebrity Golf Championship. ••• (🎥Via: @nhlonnbcsports)

On Thursday, Oshie took his daughter, Leni, out on the course where he they drained a hole-in-one together.

After the first round of play, Joe Pavelski sat atop of the leaderboard with a strong opening score of 24 points.

tfw you’re on top of the leaderboard after day 1 of the @ACChampionship. pic.twitter.com/9zC1HO64h1

As of Saturday afternoon, Pavelski lead the tournament with a five point lead over Mark Mulder. According to the Wisconsin State Golf Association, Pavelski is a scratch golf and boasts a 0.6 handicap.