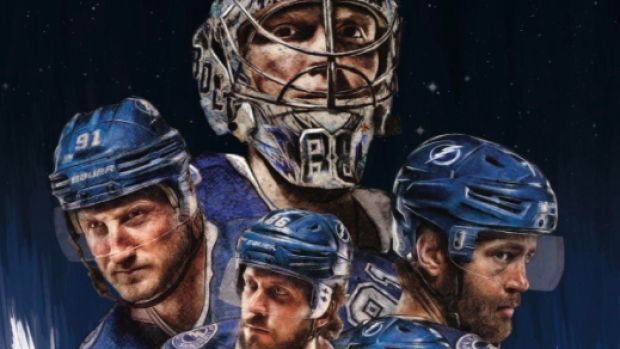 The Tampa Bay Lightning have endured a terrific start to the 2017/18 season.

Not only do they have the leading scorer in Steven Stamkos, and potential Hart Trophy candidate doing the damage on the scoresheet, Tampa is getting Vezina worthy goaltending from Andrei Vasilevskiy.

Andrei Vasilevskiy of the @TBLightning leads all goaltenders with 14 wins this season, three more than the next-closest netminders (Frederik Andersen and Matt Murray: 11). #NHLStats pic.twitter.com/zBEKfabPy3

The votes are in, and it's @86Kucherov who's dominating so far. https://t.co/Qch5XiKgPy

The Lightning have been 🔥 this year.

Stammer, Kuch and Vasilevskiy will all be on hand when the Lightning host the San Jose Sharks on Saturday December 2nd for a special Star Wars promotional night.

Any #StarWars fans out there? This Saturday (12/2) at home vs. San Jose is probably up your alley.

Use promo code JEDI for tickets, character autographs, and this sick poster!

Now we just need Brent Burns to take the warm-up in a Chewbacca outfit.

Four star defenceman that have yet to score this season. MORE @ https://t.co/Pq9Chh2PRg pic.twitter.com/J9rO2saIhx

The Star Wars theme night have been a popular hit around the NHL with the upcoming The Last Jedi movie about to be released in theatres on December 15.

On Saturday, the Coyotes had their own version of the special night.

Your favorite @NBA and @NHL teams are celebrating #TheLastJedi with Star Wars Night events. Find out how you can join them. https://t.co/MJYfDQ5NML by #starwars via @c0nvey pic.twitter.com/QmOkTq9ZT6

The Lightning sit first in the Atlantic Division with a 16-5-2 record. They own the best goal differential at 24, and are the current odds on favourite to win the Stanley Cup.