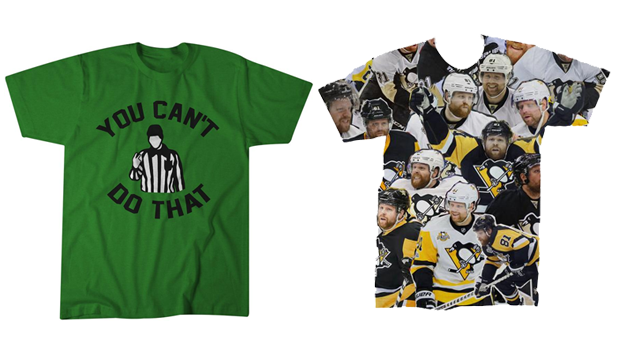 Over the past couple of days, there has been a craze surrounding one of the best hockey comedy skits in recent memory.

Chance the Rapper was on Saturday Night Live over the weekend and in one skit, he featured as a New York Rangers rink-side reporter who knew nothing about hockey. One line seems to have stuck among fans in the hockey world: “Let’s do that hockey”.

You Can’t Do That

If you follow us on any platform, you know we’re massive fans of referee blunders but the one that tops them all has to be the “You Can’t Do That” clip. Breaking T has these shirts on their website (Along with another version of the “Let’s do that hockey” shirt).

It’s only fitting that Teemu Selanne would have his own Salami shop…too bad it’s not real. Either way, @KatyaPolo has a whole site of shirts that are original ideas and designs.

If you have a hockey beard, there’s only one hockey shirt to get and it comes from Brent Burns himself.

The biggest hockey fan on one of the most popular TV shows of all time. David Puddy has become a rallying symbol for Devils players and fans alike. Violent Gentleman has a ton of great hockey shirts, but this has to be our favourite.

NHL 94 is one of the greatest hockey games of all-time and tons of sites across the internet offer these 16-bit characters for your favourite team.

We can never get enough Phil Kessel, so having him covering your entire shirt is just perfect.

This shirt went viral during last year’s playoffs, so it’s even better to see its creator make a difference with the idea. We’re sure it will be a favourite in Columbus for years to come.

PUCK HCKY created an entire Snoop Dogg Hockey Club series that we can’t get enough of. Learn more about it here.

One of our favourite photos of all-time immortalized into a t-shirt. What more could you ask for.

The Russian Machine Never Breaks blog's was the store that we featured with their Let’s Do That Hockey shirt, but they have plenty more available as well. A lot of is Captials themed obviously, but there are some trendier shirts as well like this hockey and chill.