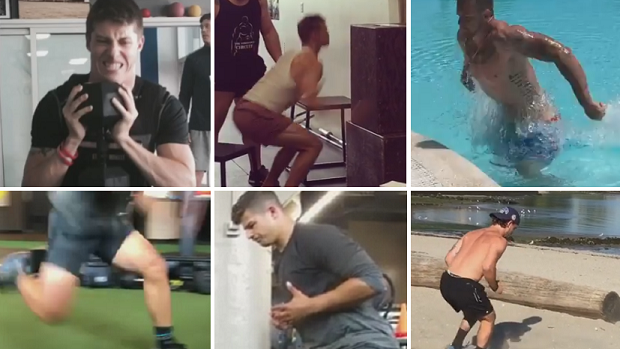 Professional athletes are in better shape than ever, and that is largely due to a more regimented training plan, especially in the offseason.

Players still like to have fun, there isn’t nearly as much time off from hockey as it seems for these players. Most of them spend a couple weeks away from training in the offseason to relax and spend time with family, but things rev back up pretty quickly. With the ability to share this training on social media, we also get a peek at what some of them are doing to take the next step forward next season.

Many younger players may not know exactly what they should be doing to train in the offseason, but the videos below might give you an idea. For example, in Connor Carrick’s post below, he mentions that he “Had a Dad at Arctic Ice Arena yesterday tell [him] his son started doing ladder drills in the living room after watching the last [workout video].”

Had a Dad at Arctic Ice Arena yesterday tell me his son started doing ladder drills in the living room after watching the last video. Love that. Still trying to break the @keiserfitness machine though... Thanks for your help @ianjmack getting close and personal when need be. I don't always shower, but I do try to brush my teeth before. @stancesocks because I like em @biosteelsports because I like their stuff too

As we mentioned above, Carrick has already had some people reach out to him about the inspiration that his videos provided their son. This is one of the best displays of explosiveness we’ve seen in any NHL player’s workouts and it’s obvious how this would translate to the ice.

This definitely isn’t a regular workout, but it’s a crazy display of athleticism.

First box jumps of the summer. Off to a good start with @khjelholt7

How is this even possible…

While it may not look like the heaviest weight to be lifting, Del Zotto has plenty of videos on his Instagram showing off feats of strength. However, this is one of the more interesting exercises he does that is sure to improve your stability and strength.

Sled pushes are excruciating, but there’s no doubt they’ll help him in some board battles next season.

While a lot of these exercises show off the brute strength of these players, this is a great example of their elite agility. It looks like they’re doing this on fast forward.

Can't say enough about the work that @marner_93 has been putting in this off season. Focused, driven and committed to getting better everyday. Single leg squat with a 45lb weight vest and a 50 lb DB and sled pushes at the end of the work out at over 600 lbs. Heavy sled pushes are not something I use often, but today it was tool in the box that we used to continue to load the lower body with out putting unneeded stress on the spine. #offseason #hockey #athlete #noblestrong #isuckathashtags @thehillacademy1845 @bardownhockey @nhl @mapleleafs @nhl

Mitch Marner has clearly been working on getting bigger and stronger in the offseason.

If you’ve ever tried to run on sand, you’ll understand what it does to your agility. Trying to make quick cuts and turns is way more difficult and tiring.