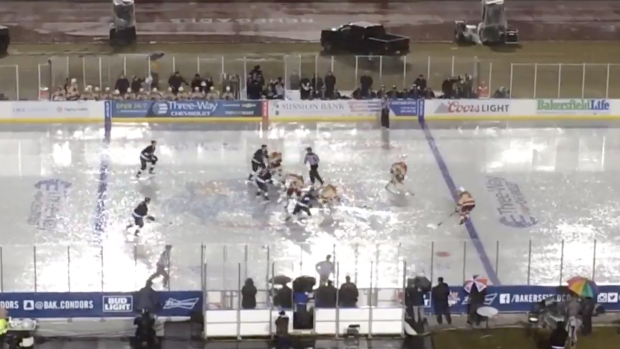 Outdoor games in professional hockey league are an incredible experience for both the players and the fans.

That being said, there's one thing that can ruin the experience, and that would be mother nature.

While we have yet to see rain severely impact an NHL Winter Classic (we got a close call in St. Louis this year), we can't say the same about an AHL Outdoor Classic.

Saturday night, the Bakersfield Condors and the Ontario Reign battled outside at Bakersfield College's Memorial Stadium, and during the game the rain started pouring down, turning the ice surface into an actual pond.

Just a bit wet out there... pic.twitter.com/uZksOOB3t4

Start of the 2nd period. pic.twitter.com/VQHPzZZpK2

That is literally pond hockey, and it also seems quite dangerous.

Now, the next thing you're probably wondering is how hard is it to play in conditions like that, and we've got the answer thanks to these two tweets.

Griffin Reinhart just attempted a shot from the point. Water went flying 20 feet into the air. The puck a couple feet forward.

There is so much rain at the AHL Outdoor Classic tonight that whenever anyone shoots the puck, they also shoot a puddle of water pic.twitter.com/RJ8O72ia2w

Absolutely insane.  They probably should have called the game, but they didn't, and thankfully conditions actually got better for the third period.

Much improved ice for the #OutdoorClassic and immediately the @ontarioreign surrender a goal to the @Condors pic.twitter.com/MoRuSVrMv1

Still, probably best for those in attendance to keep those umbrellas close, just in case.