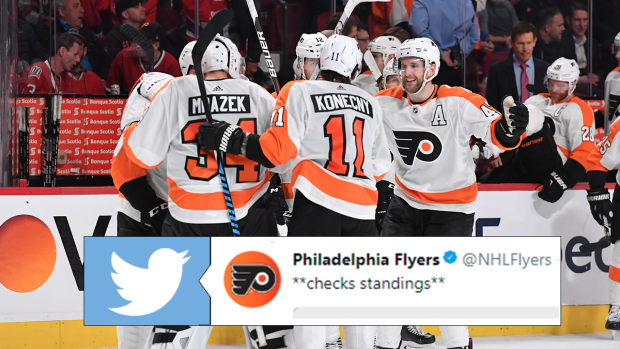 The Philadelphia Flyers now sit atop the Metropolitan Division and they are absolutely loving it.

Monday, the Flyers went on to defeat the Canadians 1-0 in the shootout, earning an ever so important win as the two points were enough to bump them ahead of the Capitals in the metropolitan division through 63 games.

The Flyers Twitter account celebrated the occasion in grand fashion, posting their own remixed rendition of 'All the Way Up.'

GET IT? Because they've moved all the way up into first place. Now this is the sort of social media posting that we love to see, as it's both informative and fun. The Capitals have won the metro division two years straight, so you can understand why the Flyers would be excited to vault over them in the standings.

But while we'r eon the topic of 'All the Way Up' memes, we feel it's important that we share the one that was easily the best of the bunch from the Vine era.