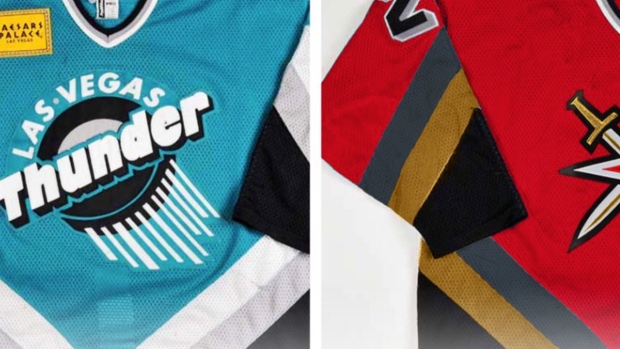 The NHL jersey rumour mill keeps on turning, with the Vegas Golden Knights possibly rewinding time and showcasing their past professional hockey endeavors with a tribute to the Las Vegas Thunder. The Sin Bin, a Golden Knights blog, has created a close mock-up to what they believe their uniforms will be for this upcoming season.

The @GoldenKnights jersey is inspired by the Las Vegas Thunder jerseys who played in the #IHL back in the 90s. Via @icethetics pic.twitter.com/JWrbEKoJqB

The Thunder had a 6 year run in the now-defunct International Hockey League, starting from 1993. However, in their short tenure in the league, they had captured both the regular season and division titles in their first two seasons of their existence. They ceased operations on April 19th, 1999 due to being unavailable to find a new home for the following season.

We're liking where this is going so far, with the retro revivals. This begs the question: Will they bring back some vintage mascots as well? Imagine getting another glimpse at the old Thunder mascot, Boom Boom.

Read about Boom Boom the polar bear mascot for the IHL's Las Vegas Thunder from 1993-1999. Got a lot of behind-the-scenes stories from Vegas' first pro hockey team-https://t.co/gEMRVQGA7p #VegasBorn pic.twitter.com/7PWf0yQenr